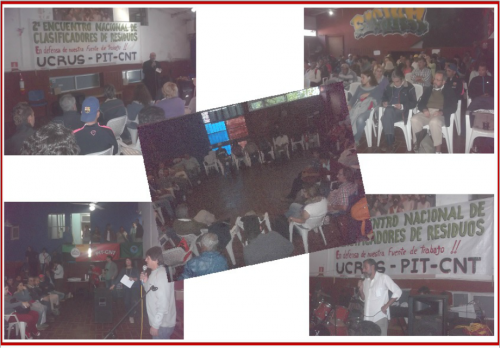 On April 18th and 19th, and revolving around the struggle that UCRUS is currently moving forward in regard to the Classification Plants and the Trust Fund, the 2nd National Waste Pickers’ Meeting took place with the participation of more than 110 waste pickers. The Meeting also included the participation of members of the Occupational Health and Safety Secretariat of the PIT-CNT (Uruguay’s national trade union centre) and of the Cooperative Studies Unit (which belongs to the National Public University, Universidad de la República). The former put together a workshop about the need and role of trade unions, and the latter organized a workshop about public policies related to waste management.

Also, the Convention’s Gender Secretariat took the floor to express the importance of the role of women waste pickers in the trade union movement and to raise the issue of gender equality, and a female member of UCRUS, Julia Araujo, presented a report on a recent trip to Brazil to attend a Gender Meeting of Women Waste Pickers. (…) Furthermore, and besides the Meeting Declaration, other resolutions were passed, which dealt with collective agreements, recycled/classified materials sales schemes, a Packaging/Containers Law, the issues of exclusion zones and the confiscation of carts and horses, and the ongoing conflict with the Plants; moreover, a provisional National Directorate was established and was assigned the task of systematizing a Plan of Struggle to move forward on the tenets that resulted from the Meeting’s rich debates.

The Meeting’s Final Declaration will be sent to several Ministries, the Municipal government and other relevant bodies. Read full article (in Spanish).