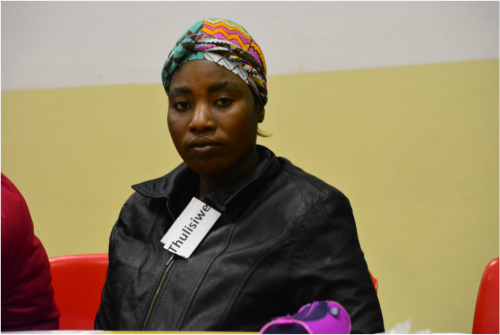 Thulisiwe started working on a dumpsite five years ago for Wetland Recycling a company owned by a white man. However, in 2013 after three years of being subjected to irregular wages she decided to leave the company and went to work on her own at another dumpsite. Soon thereafter 10 women waste pickers got together and tried to form a cooperative but their application to the local municipality was rejected and the reason given by the municipality was that the members were “too old”. The group persevered and have eventually been registered in April 2015 as a primary cooperative of 8 women and 2 men, called the Enhlosweni Coop. (Enhlosweni means place of intentions/hope/goals in isiZulu.)

The group of women had to beg the two men to join them because it felt like they were not making any progress in their engagement with the local government officials at the municipality and that they were just not being taken seriously as women on their own. Although as Thulisiwe explains, now that the men have joined them they seem to be working very well together and share the responsibility for the success of their cooperative. Enhlosweni Coop’s treasurer is Joyce Fakude and the secretary is Alphas Mdletshe.

Thulisiwe explains in great detail, the coding of the different waste material that they separate at the municipal dumpsite where they work from 8am to 4pm daily. The cooperative does not have a bailing machine yet so the waste materials, from plastic containers (PET) to cardboard cartons (HD), are compressed by foot.

Besides her work as part of the cooperative Thulisiwe also collects wine bottles which is more profitable to do on her own. An average of 1000 bottles could mean an income of R2200 at a time; the price per bottle that she receives from Empangeni Distillers ranges between R1 and R2.10. She always ensures that she has the transport cost of R700 available beforehand so that all the money that she earns from the bottle sales ‘goes straight into her pocket.’ Her business training skills come to the fore in conversation as she comments that in business ‘sometimes you win and sometimes you lose’.

Their biggest challenge at the dumpsite is having their material stolen by other waste pickers or thugs from the community that wander into the dumpsite throughout the day, because the security staff employed by the municipality are only there to direct the dump trucks in and out of the site.

Advantages of a workers cooperative:

Thulisiwe displays very strong values of collectivism as she explains how the cooperative was formed and how they agreed to work together despite the initial registration challenges that they have experienced. For example they have not ‘dropped’ the older members of the group but still all work together. At the time of the interview the cooperative was in the process of obtaining a letter from their local ward councilor that would enable them to open a club account at the bank, but in the meantime they had a normal savings account and three signatories to ensure transparency and full accountability within the group. They had also agreed that the income would be shared equally among them at the end of every month. The cooperative had received training from different government departments during their formative period and Thulisiwe acknowledged these training experiences for inculcating the strong values of collectivism upon which Enhlosweni Coop had been formed.

Although the municipality provides basic ablution facilities at the dumpsite where Thulisiwe and her colleagues work, they still lack proper shelter where they could work and a safe storage space for their waste material. They could do with a baling machine and their own scale too. Thulisiwe speaks with fervent determination of how the cooperative can still grow to improve their working conditions, their income and the lives of their families.