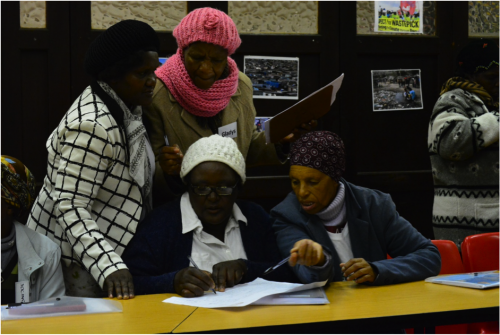 On 26-27 May 2015, 30 women waste pickers gathered at Community House in Salt River Cape Town. They gathered at a workshop facilitated by WIEGO in partnership with the International Labour Research and Information Group (ILRIG) to speak about the challenges and issues that they face as women waste pickers at home, in their workplaces and their organizations, and to explore what needs to change. Ten of the women travelled from cities and towns outside of Cape Town and most of them had never flown or been to Cape Town before. The women belong to the South African Waste Pickers Association (SAWPA)–a national association- and the local Cape Town organization, Siyacoca (which means ‘We are cleaning’ in isiXhosa).

As they shared their experiences through interactive social mapping exercises, the women highlighted the following challenges and issues that they want to address;

Ideas discussed among the women, of how to address the challenges and issues that they have identified;

The women were inspired by the initiatives that the different groups among them, were already taking to organize as women and as waste pickers in their communities; such as door –to-door membership recruitment and combining their waste material to avoid exploitation from unscrupulous middlemen who want to pay differentiated rates for the same materials in different areas.

A highlight of the workshop was watching the recorded message to the group by Madalena Duarte (from the waste pickers’ cooperative in Brazil). The women realized that although they lived continents apart from each other their situation was very similar. They left the workshop determined to persevere and work towards a common goal to ensure their independence as women, to be recognized as workers and to struggle for access to basic social benefits such as maternity leave. Follow up activities have been planned to take this work forward.