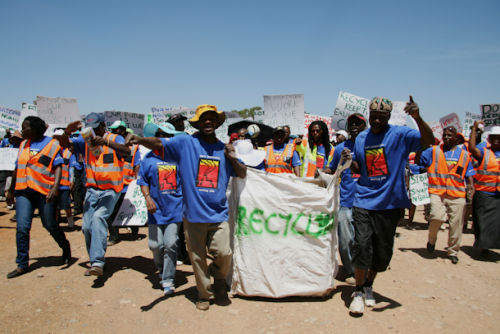 Fifteen waste recyclers brought a municipal waste management meeting to an hour-long standstill last Thursday at the Harry Gwala Stadium. Open to everyone residing within the uMgungundlovu Municipality, the event organisers, namely the municipality, stated they could only accommodate two waste pickers — not fifteen. Representing 300 waste pickers from the New England Road landfill site, the 15 waste pickers were not budging until their concerns had been heard, again. Waste pickers have been waiting almost three years for progress on construction of a materials recycling facility (MRF).

In 2011, the Department of Cooperative Governance and Traditional Affairs (CoGTA) allocated R21 million to uMgungundlovu District Municipality with a condition to construct the MRF within one year, otherwise funding would be withdrawn. The importance of the facility for the municipalities is job creation and more space at the landfill for non-recyclable items; for the waste pickers it is maintaining their sustainable livelihood, better working conditions off the landfill site and the potential to recycle more and thus earn more.

The district consulted with waste pickers at the landfill before they submitted a business plan to CoGTA. Waste pickers discussed this and through the help of the Department of Economic Affairs and Tourism (DEDT) workshopped waste pickers on how to form and manage a cooperative. Some of the waste pickers on the landfill have not yet joined the cooperative formally due to lack of money to pay the membership fee. The plan from the registered cooperative members is to accommodate, where possible, those that have not paid.

The district went as far as appointing the consultants to construct an MRF, contracts were signed between the district and service providers. Waste pickers resorted to writing letters, emails, office visits and lastly, a protest. Only after a protest held by the waste pickers and the publishing of a front page article did the municipalities decide to call a meeting to include the waste pickers. In March, the district Mayor, Honourable Yusuuf Bhamje and Municipal Manager Sbusiso Khuzwayo, handed over the project to Msunduzi Local Municipality citing institutional challenges between the two municipalities – these challenges were not fully explained. Msunduzi Municipality represented by process Manager Mr Mandla Zuma thanked the meeting and was happy to have been given a chance to build the MRF. CoGTA agreed to reallocate money to the local municipality when a business plan is put forward to them first.

Subsequent follow ups with Msunduzi Municipality have lead certain municipal officials reneging on the commitment taken up in the meeting. The waste pickers were thus thrown back to square one as the ball is thrown between the two municipalities.

Whilst previously regarded as scavengers, waste pickers form an important part of the local economy, however, are forced to work in inhumane conditions. It would be a critical milestone for the municipalities if the MRF is built. Several accidents on the landfill site, some of which have resulted in the death of waste pickers, will potentially be curbed by the existence of a facility off the landfill. The MRF provides a good model for waste separation at source, sorting bailing, selling and marketing of the project. The initial employment potential is more than 200 people at the MRF, and another 100 people at the composting facility, which is part of this entire project.

As a result of Thursday’s action, waste pickers and groundWork will be meeting on Monday at the New England Road landfill site where both municipalities will directly address waste pickers on the challenges regarding the MRF. Waste pickers will be afforded an opportunity to ask questions as well and will hold them to account in order that the project gets off the ground.

Musa Chamane is Waste Campaigner at groundWork, which is the South African member of Friends of the Earth International.