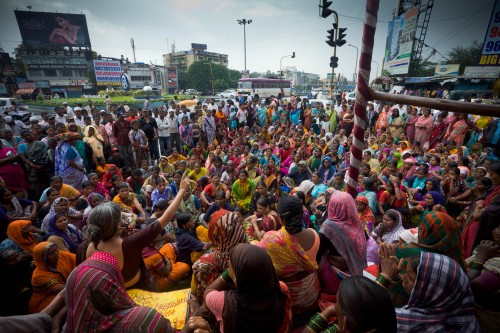 The members of Kagad, Kach, Patra Kashtakari Panchayat (KKPKP) – wastepickers have been providing waste management services to the residents of Pimpri Chinchwad for years now. The Pimpri Chinchwad Municipal Corporation dishonored their services by not adhering to Minimum Wage Act. This agitated the wastepickers. They protested, met elected representatives to take up the issue in hand. Further, a case was filed by KKPKP at the Labor department in July 2013, seeking statutory minimum wages for waste pickers as per the Act. While the hearings and cross examination of the case proceeded, members continued to agitate for their dues, whilst asking for fairer contract terms.

In response to clarification sought for proceedings of the case, Shri Hendre, Additional Commissioner, Labor Department stated that PCMC is liable to pay up to 10 times the amount due to wastepickers as penalty for not adhering to Minimum Wage Act. This forced PCMC to act. Not only have they published new tenders with provisions for Minimum Wages which will be awarded in a month, but they have also committed to part payment of dues as an interim relief to the waste pickers. Part payment towards 12 months of work, out of the 32 months worked has been transferred to the wastepickers accounts on 15th June. “It is a long pending process and the amount is far less than what is rightfully theirs, but atleast it is a new beginning. We will continue to agitate peacefully and seek recourse of the law to ensure all workers get their complete dues” says Sonali Kunjir, Joint Secretary- KKPKP.

Since November 2010, members of KKPKP are working under labor contractors who have been paying them INR 100/day for the back breaking, dehumanizing, work of collecting waste from households and roadsides. As mentioned above, this was far less than the minimum wage framework. The contractors themselves have been shortchanged by the Pimpri Chinchwad Municipal Corporation (PCMC) and paid Rs 200/- per wastepicker per day. There was no provision for overtime, paid leave, bonus and other statutory benefits extended to employees. “Instead of sharing that amount fairly with us, contractors have chosen to keep 50% of it in their pockets” says Anita Dahake, KKPKP leader.