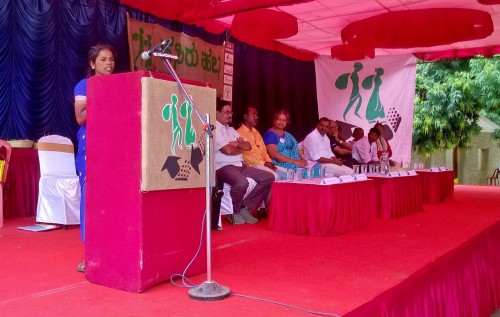 Waste pickers and scrap dealers are self employed workers in the informal economy who earn their livelihood from the collection and sale of recyclable waste. They collect discarded materials that have zero value and convert it into a tradable commodity through their labour in extracting/collection, sorting, grading and carrying/transporting. There are approximately over 20,000 wastepickers and an estimated 10,000 scrap dealers and other waste handlers in the city. Their work has ensured that Bangalore recycles 1050 tonnes of waste saving BBMP approximately 84 crores each year in collection and transportation of waste. These informal economy waste workers (numbering 15000- 20000) are also among the most vulnerable populations in the city. Most studies state that that a significant number of waste pickers are women who belong to socially marginalized populations, including backward castes. Further, the studies found a significant number of young (18 to 40 years), illiterate and economically & socially disadvantaged people engaged in waste picking in the city. In addition to traditional waste pickers, a significant proportion of the migrant population in the city is working with waste. The waste pickers’ access to food, water, sanitation, housing and health facilities in the city still remains inadequate with the situation being worst among migrant waste pickers living in temporary settlements. The working conditions of waste pickers are also deplorable. Safety gear is not a priority for formal economy waste workers and in the informal economy- it is not even a possibility. Armed only with old shoes and clothes picked out from waste heaps and a stick to sort through trash, cuts and burns are every day realities which over a period of time become major injuries. Health and nutrition security is must for wastepickers to continue with the work they are doing.

As a minister and a representative of state government we ask for the following:

We look forward to your continued support in our struggle and we hope that you would champion our cause at the state level to bring the changes that we would aspire for.

Response of Mr. U. T. Khader to the key asks: Mr. U.T. Khader committed to initiate a discussion with the Chief Minister Mr. Siddaramiah for bringing a state level policy for integration of wastepickers in solid waste management systems and for provisioning of other social welfare measures. He also assured that either a stationed primary health center in the settlement of the wastepickers’ community or a mobile van for the same purpose will be provided by the state government.