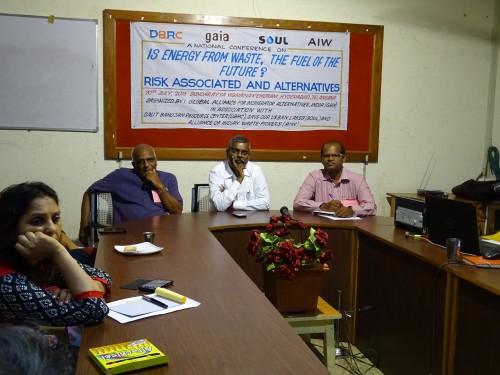 Still from the Workshop themed ‘Is Energy from Waste- the Fuel of Future? Risk Associated and the Alternatives’ organised by Global Alliance for Incineration Alternatives (GAIA), Alliance of Indian Wastepickers and Dalit Bahujan Resource Center.

Electricity (Amendment) Bill, 2014 introduced in the Parliament, last year, leaves more questions than answers. The bill was listed for discussion in Monsoon session. The logjam in both the houses i.e. Lok Sabha and Rajya Sabha, resulted in a complete wash out; as a result the bill may resurface in winter session. It is important to start the conversation on the given bill in public, so that parliamentarians can have informed discussion. There are certain flaws in the current framing of bill, which need to be rectified and are presented in the post below:

The whole bill will not be reviewed in this post, inputs and reflections will be restricted to the sections on ‘renewable energy’. According to the bill, “ renewable energy sources” for the purposes of this Act, means the small hydro, wind, solar, bio-mass, bio-fuel, bio-gas, co-generation from these sources, waste including municipal and solid waste, geothermal, tidal, forms of oceanic energy and such other sources as may be notified by the Central Government from time to time.

Energy derived through the process of incineration of waste including municipal and solid waste is categorised as ‘renewable energy’. This is not at all acceptable. It is a definition evolved for convenience purposes and leaves the emerging discourse on ‘waste to energy’ at bay.

As per United States Environment Protection Agency ‘Renewable energy includes resources that rely on fuel sources that restore themselves over short periods of time and do not diminish. Such fuel sources include the sun, wind, moving water, organic plant and waste material (eligible biomass), and the earth’s heat (geothermal).’ In this definition reference to waste material is limited to eligible biomass and not extended to dry waste or inorganic/inert waste.

International Energy Agency calls ‘energy derived from natural processes(e.g. sunlight and wind) that are replenished at a faster rate than they are consumed. Solar, wind, geothermal, hydro, and some forms of biomass are common sources ofrenewable energy.’

Texas legislature has further strengthened the framing by passing the following definition in the state legislature: ‘Renewable energy: Any energy resource that is naturally regenerated over a short time scale and derived directly from the sun (such as thermal, photochemical, and photoelectric), indirectly from the sun (such as wind, hydropower, and photosynthetic energy stored in biomass), or from other natural movements and mechanisms of the environment (such as geothermal and tidal energy). Renewable energy does not include energy resources derived from fossil fuels, waste products from fossil sources, or waste products from inorganic sources.’

Henceforth, Indian understanding of ‘Renewable Energy Sources’ stands against the internationally accepted and prevalent norms. It has been widely agreed that inorganic/inert waste which includes plastic, paper, clothes, rubber (the list is not exhaustive) is worth recycling, up-cycling and down-cycling and should not be incinerated for energy recovery. There are certain categories of waste which are not yet being recycled; they may become valuable and useful in the coming years, thus there is no need of shunting them to incinerators. You can read the whole post here…