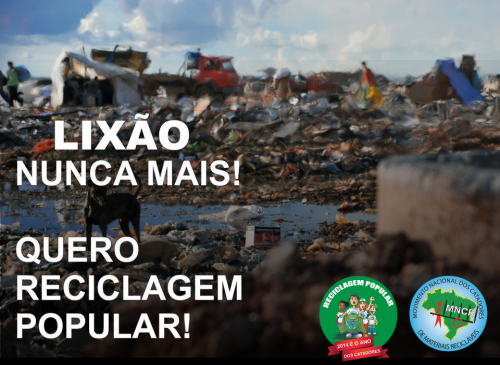 The continents of Africa, Latin America, and Asia, historically devastated by wars and occupations, are now devastated by thousands of open garbage dumps, huge producers of carbon dioxide. Besides receiving local garbage, dumpsites are a destination for waste produced in North America and Europe, responsible for the majority of the planet’s environmental degradation.

We humans are moved by greed and wealth, guaranteed through the exploitation of workers and of nature. The capture, generation, and distribution of energy – primarily based on fossil fuels – is also destroying the Earth.

It’s important to highlight that solid waste can be seen as part of nature and not a cancer of the Earth – as long as it is dealt with sustainably through recycling. Today, nearly all effective work in recycling today is done by an army of more than 15 million waste pickers across the globe – more than 4 million in Latin America alone, according to the World Bank.

This commodity chain is dirty because it’s based in the inhumane exploitation of the work of waste pickers — whom it prevents from evolving socially and economically. We are in urgent need of a change.

In Brazil, there are more than 2,000 dumps that receive the waste of more than half of the country’s municipalities as part of contracts with private companies that dominate and exploit recycling and the transportation of recyclable materials, with no concern for the environment. Municipalities, breaking national laws that have banned open dumps since 1980, continue to invest public money in a waste management model that incentivizes environmental destruction.

As a result, only 3 percent of solid waste is officially recycled, disrespecting the work done by more than 1 million waste pickers that live in the dumps and in the streets of our country, that guarantee the recycling of more than 98 percent of aluminum, 60 percent of plastics, and 40 percent of cardboard. Though ignored, waste pickers remain the largest environmentalists.

As the National Movement of Waste Pickers (MNCR), we have introduced and fought for Popular Recycling, the only technological route that can guarantee the social and economic inclusion of waste pickers. Popular recycling defies the logic of concentration of wealth, social exclusion, exploitation and the environmental destruction upon which the current model of recycling is based, and aims to amplify the knowledge and participation of the society that produces solid waste.