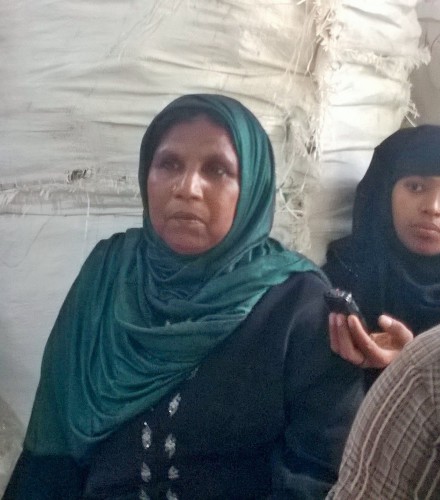 “Nayandahalli, 25 years back was jungle. There was no electricity, water, or roads. On a vacant plot, the landlord gave us permission, and we put up a hut, as  my husband found a job as a watchman. Originally from Mulbagal, Kolar, after marriage I moved to Mandya. Following a family dispute, my husband and I moved to Bangalore. Living here, my thoughts were always on my children’s future, so I worked as an incense stick maker, but the money was hardly anything. And then tragedy stuck… somebody told us, “Give me your child and I will educate her”, but my heart was not at it. I went back to Mandya. My husband and one of our children came back to Bangalore and our kid got lost. Though we found her, I began questioning myself, for how long should I be dependent, and why should I give my child away to someone else. That was when I decided that I had to look for work and I joined the godown and started my career as a waste-sorter. If I worked, I would get money, if I did not I would not get any.  In my work, from glass pieces, to needles everything pricks. I often get hurt.  There is no social security, if we fall sick. As long as you’re healthy, you have work.  Worked there for 20 years, and then we decided that we need to move up the ladder and start a godown. But now we have been asked to move out, a notice has been issued by the government. And that is the story of my life…”-  Zarina

Shrinking city space pushes most informal economy outside the margins making their invisibility more prominent. Isolated, ignored, taken-for-granted these places continue to be at the mercy of landlords, holding hardworking informal micro- entrepreneurs dealing in waste to ransom. Waste, as they say is a social and cultural construct, and this is the bane of our society determining our attitudes around waste, and the people working with and in waste.  It is no wonder then, that the recycling hub of Bangalore- Nayandahalli was located at the outskirts of the city in the early 1970s, as evidenced by Zarina’s story. Given, the changing face of the area with the metro construction, real estate prices have picked up and the recyclers have been given notice to move out.

What spaces, places and sites exist for recycling of waste? Why is the informal waste economy not given due recognition, as opposed to private waste to energy players? While waste in India, has always had political framing, with serious economic value attached to the process of collection and disposal and large scale projects. Recycling and recyclers continue to be in the margins, as evidenced from the ethnographic study of Nayandahalli, over the two month period and the numerous policy documents that the country has. Continued here…

The post here is a part of the Notes from Nayandahalli series and is a reflection of an ongoing study supported by Indian Institute for Human Settlements. You can find the previous posts here… Post 1, Post 2.