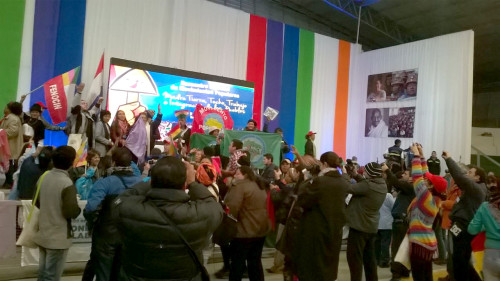 On July 7th, representatives of thousands of social movements from around the world gathered in Santa Cruz, Bolivia, for the World Meeting of Popular Movements. The opening ceremony began with an unifying activity that focused on the control that multinationals have over our natural resources, land, water, and fire – and how these greedy corporations prioritize any means of production, using wealth, destruction and control, all for money. Meanwhile, millions of people around the world, mostly working class, survive on the scraps of capitalism. The activity was a reminder that popular movements have historically organized themselves and through struggle, freed themselves from this kind of control and have proposed new models based on the defense of nature and the inclusion of people who have a right to human dignity. Included in the debate were examples of resistance and struggle, from the leadership of women small farmers that have for many years organized resistance movements and grown healthy foods, resisting the multinational model. Alex Cardoso, a waste picker delegate with the Brazilian Movement (MNCR) who was present at the Meeting, stressed the importance of social movements unifying around causes, especially social and environmental causes. “As waste pickers, we not only fight for recycling but for the advancement of our people,” he said. Access the article (in Portuguese).

Tweet
| Solidarity |
Comments Off on The World Meeting of Popular Movements discusses the right to a sustainable and just planet
Comments RSS feed for this post.
Loading Comments...