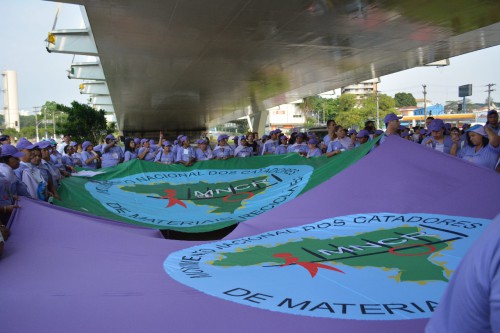 Women waste pickers and other social movements gathered in the city of Osasco, São Paulo, on September 25th and 26th for the first Statewide Meeting of Women Waste Pickers. The meeting brought together 400 workers from 70 cities across the state, with the goal of sharing experiences and lessons about women’s rights and leadership in workplaces such as cooperatives and associations. Activists from other social movements were invited to attend, such as the Landless Rural Workers’ Movement (Movimento de Trabalhadores Rurais), the Afro-Brazilian Women’s Movement (Coletivo Impulsionador da Marcha das Mulheres Negras), the Solidarity Economy Network (Rede de Economia Solidária), Women in Informal Employment: Globalizing and Organizing (WIEGO), among others. The waste pickers also participated in workshops about sexual diversity, violence against Afro-Brazilians, the division of labor in cooperatives, and hosting workshops for men about gender. Health, domestic violence, education, and the solidarity economy were themes present at the meeting. Professional recognition was another theme in the roundtable discussions. Women shared positive experiences getting contracts in their municipalities, but also shared the need for the training of women workers who may be developing their cooperatives and haven’t yet been contracted by the municipality. To conclude the meeting, the workers marched through the streets of Osasco with the objective of educating the population and bringing visibility to their advancements and demands. They also demanded gender equality.