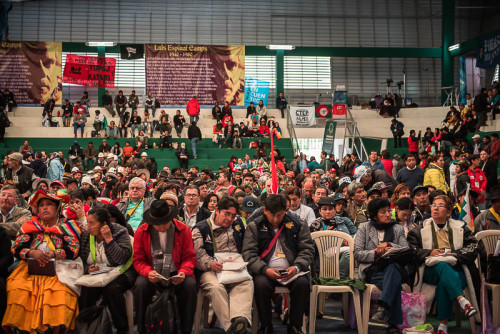 The 9th of July took place the second Meeting of Popular Movements at the Coliseo Municipal de Santa Rosita, Santa Cruz, Bolivia. With the assistance of thousands of delegates from over 40 countries, a panel on ”Employment” was conducted, this being one of the main focus of the WMPM besides “Lodgings” and “Land”. Different leaders and delegates from several countries, including men and women leaders of the popular movements, participated on the panel “From exclusion to the grassroots organization of workers”.

On his speech, Esteban Castro said: “For us, at the CTEP, we see it like this: capitalism development plans leave many workers without jobs, so we had to create one. So we need [a] union organisation for all these workers, they will not go back to the same system that neglected them”. “Today we tell the corporations, go to hell! We don’t need you! We, as workers, know how to organize production, how to trade, and we have dignity, and most certainly Bolivia proved workers’ dignity. And there he is Evo Morales! There you have it, this people´s dignity!” concluded Castro. Read the full article (in Spanish).