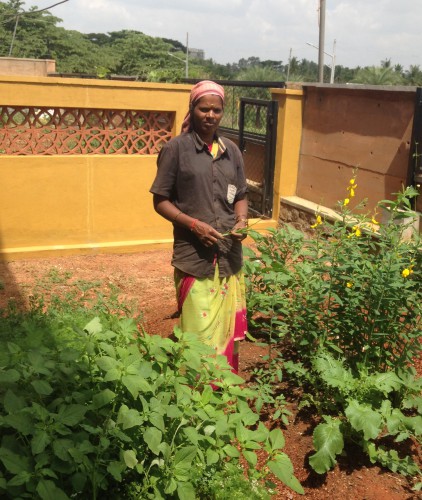 Lakshmi was just like any other waste-picker. She looked for items of value in the trash. Hailing for Tamil Nadu, she landed in Bengaluru. She became a waste-picker to take care of her 5 children. After wastepicking for more than a decade, she realized that much valuable waste is not available on the streets any more. To better her livelihood she started managing the dry waste collection center (Municipal Corporation installed inorganic waste aggregating and sorting units). This was a loss making venture for her. She needed a better source of income. After eighteen years of sorting and aggregating dry waste, she had farming tools in her hands. No she didn’t return to Tamil Nadu. She became an urban farmer in Bangalore.

A lot of old and retired Bangaloreans always talk about the age bygone- an era when Bangalore was a garden city. IT Boom was yet to be experienced. People grew food in their back and front yards. There were tomatoes, spinach, beans, cauliflower and chillies growing in the small patches around the place of residence. There were vines of grapes covering the walls and going beyond the roof. Slowly- slowly the landscape changed.

Glass buildings came up. More than 20 storey apartment buildings are blooming in the skyline of the city. Road network is being expanded. More people are moving in for search of better opportunities.  Bangalore like any other city in India was and still is unprepared for the adventures of urbanization. Infrastructure and environment services are insignificant. Consumption is growing, so are the heaps of waste. Garden city has become garbage city.

Once known as garden city, Bangalore is becoming garbage city. This is unacceptable to many citizens. Lot of brainstorming is going on both in the minds of government officials and civil society, many solutions are being proposed. One of it is door step waste collection of segregated waste and its aggregation and processing in neighbourhood Municipal installations.

There were some individuals who were thinking why give all the waste to Municipality. Waste is resource. They have started asking very basic question: ‘what stops us from managing our own waste and grow food with the help of generated waste. Food and waste both are interconnected. We buy eatables; cook them, organic waste is generated. Organic waste can be processed in compost, and food can be grown from compost. Isn’t it what the people in Western countries are referring to as Circular Economy?’

People are increasingly becoming conscious about the usage of chemicals in their food and are looking for alternate options. Growing food at one’s own premises if only to supplement is becoming popular. The space available is not huge and hence container gardening is popularizing itself. There is absence of work-force which can support in both composting and urban gardening. Residents all over the city need someone either full time or part time to do the composting and help in gardening.

Hasiru Dala, a wastepickers organisation looked at it as an employment opportunity. There are more than 25000 wastepickers in Bangalore. Not all want to continue moving through the trash for finding recyclable materials. When some of the members were asked, ‘would you like to help in composting and urban gardening?’ The answer was affirmative. Continued here…