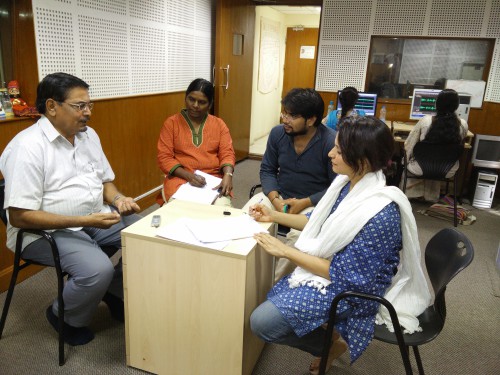 Anselm Rosario is a known name. Story of waste management, wastepickers’ welfare is incomplete without him. His biographical sketch is an important chapter in the history of informal labor mobilization. He started working on waste and wastepickers at a time when the cities of developing countries were opening their eyes to modernity. As a part of Notes from Nayandahalli series we are presenting the story of Anselm Rosario.

Anslem Rosario completed his graduation studies from St. Joseph College affiliated to Bangalore University in the early 70’s and enrolled for a certificate program in hotel management. After several years in the hotel industry, Anslem left to seek true meaning of spirituality and was initiated in the Transcendental Meditation technique(TM) in seventies by His Holiness Maharishi Mahesh Yogi, founder of TM movement.  After completion of the course, he graduated as a teacher of Transcendental Meditation and worked as a full timer and joined various campaigns of TM movement in Madhya Pradesh, Assam, Karnataka and Goa and during that time taught more than 5000 people in TM. He also completed an Advanced Training Course at Shankaracharya Nagar, Rishikesh, before returning to Bangalore.

In the early 1980s, he worked as development officer for the All India Catholic Union in Karnataka and Goa, and moved on to work on urban poor issues. Observing the most runaway or abandoned street children took to waste-picking as a means to survive, he founded the Ragpickers Education and Development Scheme in 1985. The scheme had several components including a night shelter, which was constructed at Scared Hearts Church, also included washing facilities, food and access to basic medical care; a Fair Price Shop that respected the children’s need economic independence and purchased the materials collected by the children at market rate.  This was followed with a new Street Contact Education Programs to reach out to children involved in waste-picking. In 1987, he moved to set-up Mythri Sarva Seva Samithi, as he wanted a secular institution. In 1989, through the organization he started collecting waste directly from homes, to ensure that children are free to study in the mornings. Separate collection of dry and wet waste ensured. The program also sought to legitimize informal waste workers contribution and pioneered the integration of waste-pickers in the city’s solid Waste Management. He is the recipient of “Ashoka Fellowship” (1989) from Ashoka Innovators for the Public, Arlington, Virgina, USA .He received the “Public Relations Award 1993 for Environment” for his significant contribution to the creation of cleaner urban habitat by Public Relation Society of India, Bangalore Chapter. He also received the “Environment Award for 1995”, by the Karnataka Pollution Control Board, Government of Karnataka.

Mr. Rosario, tell us something about yourself and how you went into this association with waste-pickers

I graduated in Science and then enrolled for a program in Hotel Management. In the course I am came across an introduction to yoga and that was my first introduction to Indian Spirituality. That was the time, when most young people were looking for something meaningful, many found it in drugs, but we were looking for the actual stuff. We were into music and whatever was happening around at that time all. This was fascinating for me. I gave my course and started learning yoga and started looking for gurus who would give me that kind of knowledge. It was a long search. Then I went and joined Transcendental Meditation technique(TM) by His Holiness Maharishi Mahesh Yogi, founder of TM movement. I was trained as teacher and I spent 8 years in the organization, travelling all over India teaching meditation.  When I came back to Bangalore, I felt that spirituality is ok, but we need to do something real. My work started early 80s; I joined some groups, working with workers in City Markets, who carried the sacks. I would go every weekend. I felt there was something that I need to do. That’s when I looked at waste-pickers, popularly called rag pickers. We started interacting with them and gradually the scenario changed, as by then plastics came in. While the males went into sorting, the women and children went for collection of waste. Initially I taught the children were all orphans, later we discovered that everybody had families. They were second or third generation migrants from different parts of the state. In 84-85, I thought I should do something for the kids, and not a charity approach, but something more with a developmental approach.

The life was around junk shops or scrap shops and then we started Ragpickers Education and Development Scheme in 1985 in Sacred Heart’s Church, we really had to negotiate with the church for a place. And we put up a shelter from the bricks, of a demolished building. It wasn’t an orphanage, rather a sleeping space for children. In the nights they would sleep and disappear in the mornings. That’s when I started realizing where they were going, to pick up waste material. The shelter ran for two three years. And couple of things happened here we realized that every kid we rehabilitated or sending them home, ten were coming on to the street, we realized that we needed a comprehensive approach,  so we could not go beyond 40-50 kids It was also becoming difficult, as we had to spend the night them.  Reflecting on this, we decided we need to move towards a secular approach and that’s when we started the Mythri Sarva Seva Samithiin 1987. At this point in time, I got curious about waste and started to ask questions on waste, whose responsibility, what is happening to waste. At that’s when we got to know about Bangalore City Corporation (BCC), as it was called then. They were spending about 6 crores, huge amount even at that time, though waste was not so visible as such. For us the interest was if kids could pick up dry waste from household and wet waste could be composted near the point of generation, they can earn a little and also study in the available time.

I don’t remember the dates properly but late eighties, early 90s we launched this project in 300 households in Jayanagar, door-to-door collection, and in the park that was given to us after two years of negotiation for composting. For composting we took the help of professors from University of Agricultural Sciences. Lot of experiments went on. Infact the first time we introduced worms into the compost pits, their bodies were bloated up because of the heat. In another incident, when we were advised to put water into the pit, the entire thing started smelling and people complained. So it took a lot of experiments in stabilizing this. In 1989-90, our program was picked by BBC “Earth File” and started airing these capsules and many people across started calling me. That was the starting point of door-to-door collection, segregation of source and to a large extent in that I can say Bangalore was the pioneer in integration of waste pickers, resident and community based approach to integration of waste-pickers.

Almitra Patel got involved in 1990-91, we were part of Swambina and Almitra took it to another level- national level. For us the challenge was how to promote decentralized approach at community level. Infact, we already had KCDC in 1986, which did not work for more than six months.

This is my brief background and later in 2003 many likeminded groups came up in Bangalore.

At that time I was experimenting with closed system called Land Lab in Mahadevpura. In 2008, I got involved with Waste Netherlands, which gave me exposure across 18 different countries. At one point in time, I was the Chairperson directing integrated sustainable solid waste management.

Can you trace the whole journey of plastics and how it came into the picture? Also, can you elaborate on the pockets of plastic recycling areas that were present in Bangalore?

In eighties, it was mostly carry bags, we did not get much of PET bottles or shampoo bottles but there were also HDP made up buckets and other things which were quiet rare. We still had aluminum and iron buckets. In 1985-86, plastic carry bags came in. That was easy to pick, but money was not much. It was visible. They (wastepickers) picked up the waste and sold it to the junk/scrap shops.  Further it was consolidated and taken to Jolly Mollah. That much we knew.

The PET bottles were a nuisance in the 1996-97 and somebody gave us an idea about PET bottle and its usage. All we knew it was going to China but we did not have the details. So three of us went to Madras (Chennai) and then we went to this company called Futura. They were making yarn out of it, after melting it. They were making jackets and other things. We tied up with the company. PET Bottles were sold at Rs. 4-5/- but the company offered us Rs. 16/- on the condition that the PET bottles should not smashed as then the sheet would have bubbles and they will not be able make yarns. I remember tying up with another scrap dealer in Kengri and we sent lorry loads of PET bottles and that’s when the PET bottles (recycling) picked up. Other things like HDP, buckets always had market. And all of them were sold based on weight. We knew this particular material was coming out, but we did not get into it, as our preoccupations were based on the community, livelihood. Continued here…