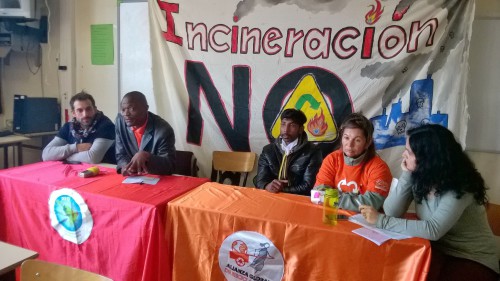 Bonjour! is probably something you’d hear Mansoor, our friendly and free spirited dry waste collection entrepreneur, say the next time you meet him.

Mansoor, who heads one of the dry waste collection centres of Hasiru Dala, in Bangalore, India, recently attended the UNFCCC climate change talks in Paris. Waste pickers from across the globe were invited and were encouraged to exchange information, views and perceptions of how waste is being dealt with in their countries and also methods by which this could improve.

The annual Conference of Parties (COP) are annual conferences held to discuss and review the aims and objectives concluded upon at the Rio Earth Summit in 1992. The Earth Summit chalked out a framework – named the United Nations Framework Convention on Climate Change (UNFCCC), which encompassed 195 parties/ countries. This framework set the objective of reducing and stabilizing the emission of greenhouse gases (GHGs), the main contributor to global warming – which through scientific evidence has proven to be detrimental to the environment, by causing irreversible damages to the climate, Earth and ecology.

So how does a waste picker help in mitigate climate change you ask? The answer is really quite simple, says Mansoor. We all know the 3 R’s: reduce, reuse and recycle. Have we really paid attention to the order in which they have been presented to us? Reduction of any waste has to happen in the first place, if can’t be avoided, next the consumer should make an effort to reuse. Only as a last resort, if the item cannot be reused, should it be given away for recycling – as segregation and recycling takes effort and energy. Mansoor explains using daily gadget we all use – mobile phones. A rhetorical question he asks us all – how many mobile phones does an individual have? Apart from the two working phones that you may have on you, we all have those extra phones – that have some small damages, just tucked away in a corner. With technology changes so often, people are increasingly tempted to change phones more frequently. Newer phones mean further extraction of the Earth’s resources to produce the devices in order to meet the growing demand. A few months down the line, a small damage to the phone and most of would like to just dispose off the phone rather than getting it fixed; thus leading to copious amounts of waste. Wouldn’t it just be simpler if we thought twice before buying a phone, and if and when it gets damaged, to just get it repaired rather than picking up a new handset?

Thus, our last resort should be to recycle – ONLY if reducing and reusing is not a possibility. Another example that Mansoor narrates is of plastic. While we all know the importance of reducing and reusing the plastic bags we get, practically anything we buy these days comes in plastic packaging, hence the dire need to recycle plastic. Recycling of plastic is done in such sophisticated methods these days that the final product is as good as virgin plastic – Mansoor tells us. Therefore, wouldn’t it be much better if we recycle the plastic, rather than making virgin plastic that requires fresh input of petroleum, and whose production process would further lead to all sorts of pollution? Mansoor feels it is important to have ‘recycled’ printed on products that are recycled, so that this creates awareness among people and encourages them to buy recycled products. Continued here….