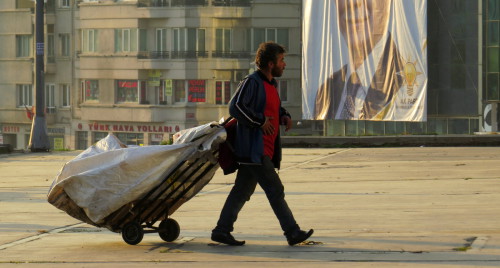 During the European Union (EU) Integration Process and EU Integrated Environmental Approximation Strategy, Turkey began to synchronize its national law. In regards to landscaping, the Environmental Law was enacted in 2003. Essentially, the law authorizes municipalities to take precautions in all areas regarding environmental protection. In 2011, the Regulation on Packaging Waste Control was issued. These two legal infrastructures support the prevention of environmental pollution, including through waste management. In regards to waste and waste management, according to the above law and regulation, municipalities are in charge of establishing and managing recycling facilities or assisting private companies to establish recycling facilities. Moreover, the law emphasizes waste collection that is performed by licensed firms. It is clear that informal waste pickers have been excluded from the Environmental Law.

There are approximately 500,000 waste pickers in Turkey

Although waste pickers in Turkey were excluded, they are key actors in the recycling chain. Despite the fact that there isn’t any official data or statistics concerning the number of waste pickers in Turkey, a calculated guess is that there are approximately 500,000 waste pickers operating in this business. When their families are taken into account, their number rises to almost 2 million, which is equal to 2.5 per cent of the total population in Turkey. Considering the demographic features, people who migrated from rural areas to urban areas generally gravitate to this work, not only due to a lack of human capital and employment opportunities, but also because they experience the worst forms of poverty. Briefly stated, waste picking is the job of migrants. Waste picking is the only survival strategy available to them.

This form of employment has expanded significantly all around the country, and it is quite possible to run across a waste picker in any city in Turkey. After the civil war in Syria, Turkey became host to more than 2.5 million refugees. Some of those refugees, the exact number of whom is not yet certain, have joined the sector. Also unconfirmed is the rumour that these refugees are subcontracted by Turkish/Kurdish pickers. In that case, what has been happening in Turkey since the beginning of this year, and why are all waste pickers about to lose their jobs?

According to TurkStat (the Turkish Statistical Institute), in only two years, from 2012 to 2014, the number of recycling firms increased at a rate of almost 60 per cent 1. But even this data shows that there is a high commercial income to be earned in the recycling sector, which is why many recycling firms have been established – to gain a market share. Furthermore, waste pickers have been labelled the “unwanted man” in the chain for a long time.

It began with a paragraph that was inserted into the instructions for waste portal usage. Accordingly, the trade between 950 recycling firms was banned. Furthermore, the trade between firms and waste pickers became difficult because it was not accepted as an “income and expenses report”; in other words, it was not legal or official. Therefore, none of the firms could trade with each other and all lost the opportunity to buy from the waste pickers who were the biggest source of waste.

The penal sanctions for this trade are extremely high. If a firm buys waste from an informal waste picker, it must then pay up to TRY 140 thousand (around USD $48,000) 2. Unless the public authorities make the decision to create infrastructure supportive of waste pickers, then all the waste pickers in Turkey might become unemployed. Additionally, because of the high rates of the sanctions on recycling firms, most stopped buying waste from small warehouses that are unaccredited. Ultimately, small warehouses – being the middlemen to whom the waste pickers sell their waste – have stopped buying waste from the informal waste pickers. Loaded bags of waste have remained unsold. Clearly, the livelihoods of waste pickers are under threat. If consideration was given to waste pickers’ living and working conditions, and their livelihoods were examined, then the issues they face would be more comprehensible.

Waste pickers in Turkey work 15 hours per day and collect an average of 200-250 kg of waste daily. However, the income they receive from this average collection is nominal. Their income per day is not more than TRY 50. They do not have access to either social security protection or good working conditions. They all wish for improvements to both their working conditions and livelihoods. What is critical to understand is that even though waste picking is difficult, dirty work, the people who are informally employed in it are not – as society paints them – “dirty” people. It is a survival strategy for those with few other options. Waste management in Turkey needs critical development which supports the inclusion of waste pickers into the system. Currently, the firms don’t have enough vehicles and employees for effective collection, whereas waste pickers don’t have fixed schedules, and can operate at any time of the day. Furthermore, the firms lack the knowledge waste pickers have on waste collection; they don’t know the streets as well as the waste pickers do. If firms take the initiative in waste management development, very few waste pickers will be employed.

What does this mean? A considerable number of waste pickers currently earn more than the minimum wage. They would like to keep this level of income, but if the firms decide to employ waste pickers, they would only offer them the minimum wage, which is TRY 1,300 per month (approximately USD $440 per month). Some would accept this offer in order to survive, but what about those with long experience in the field who made good wages? Will they be able to continue on their own despite the obstacles, or will they take their chances in a different field of work. This question is one that all waste pickers will be asking as they contemplate their futures.

Because of rising tensions in public opinion, the Minister of Environment and Urbanization stated then that the ministry would never enter into an agreement that would aggrieve waste pickers. The Minister added that the penal sanctions did not concern waste pickers; they were for licensed firms. Subsequent to this declaration from the Minister, the ministry began seeking a solution. They decided to allow licensed firms to buy waste from informal waste pickers, but the firms would not be able to enter it as “packing waste” on their income and expenses report. This practice will be announced soon to the sector.

Waste pickers must have social rights like every private citizen in society.

This step from the ministry is a temporary solution. Waste pickers remain unorganized and, as mentioned previously, they need support to improve their situation. This must be the starting point. They must have social rights like every private citizen in society. They have to organize as other waste pickers have in Brazil, India, and Colombia in order to resist policies that threaten their existence.

Additionally, social consciousness regarding waste pickers and their work and life must be encouraged. They are labelled as thieves, burglars, and addicts by second-hand info. All of these prejudices must be broken down. Previously, they could claim that they didn’t have anything to lose but their trolleys, but now the issues have gone beyond the trolleys. As a society, we must stand behind them and promote their cause; they are the hidden heroes of the environment, and they deserve a better life and future.

Serter Oran is a research fellow and PhD Candidate at the University of Ankara, Turkey.