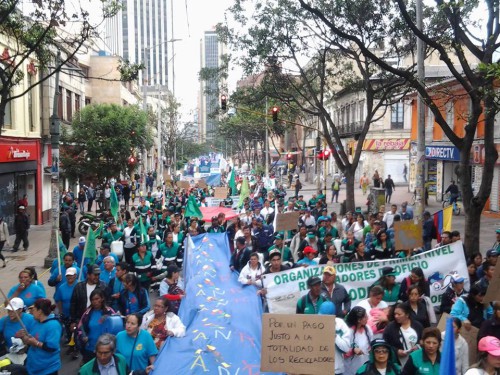 Today, March 1, we commemorate International Waste Pickers’ Day in remembrance of our compañeros who were brutally assassinated in the Universidad Libre de Barranquilla (Colombia) in 1992. That terrible day, waste pickers were tricked by personnel from the Universidad Libre de Barranquilla, who invited them to enter into the premises of the university under the pretense of providing them with recyclable materials. Once inside they were beaten and shot to death so that their bodies could be used for research and organ trafficking. The tragedy was denounced by a survivor, who during the attack pretended to be dead and later escaped.

According to the ILO, there are more than 20 million people engaged in recycling in the world. In each country our sector has unique story.

We are on the lookout for legislative changes that are taking place in several parts of the world attempting to leave the management of recycling in the hands of private companies, excluding waste pickers and their organizations. This is the case in Turkey where the Environmental Law whereby the purchase of materials from waste pickers is not legal was approved. This affects 500,000 people that make a living by picking waste.

Let’s commemorate this day by raising the flags of the cartoneros in favor of the recognition of our profession and work conditions, just as any other worker (minimum wage, social rights, social and health protection, and recognition of our organizations as legitimate).