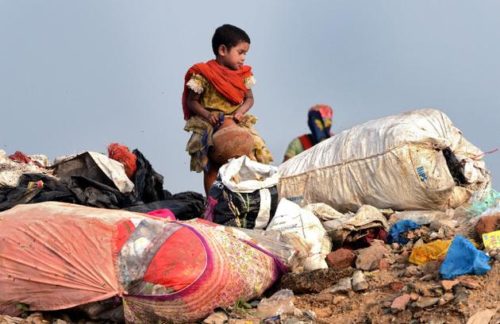 A girl at the Ghazipur landfill in Delhi Photo S. Subramaniumsubra

An evening titled ‘Waste Narratives’ was recently held at the India Habitat Centre to mark the inclusion of waste pickers and informal waste dealers in the newly released Solid Waste Management Rules, 2016. Hosted in collaboration with the Alliance of Indian Waste pickers, the evening also saw readings from the book “Bicycle Dreaming” by Mridula Koshy and was interspersed by personal stories of waste pickers from various cities. The novel, itself, focuses on the story of a 13-year-old girl, Noor and her father, Mohammad Saidullah, whose choice of profession as a kabadiwalla has been taken away from him and the consequent effect of that on Noor.

Some of the waste pickers who spoke about their ongoing struggle included Gautham from Amravati, Geeta Bai from Indore, Hasnoor Bi from Deonar dumping ground in Mumbai and Rekha Devi from Delhi. The panel was moderated by Jyoti Mhapsekar, founder-president of Stree Mukti Sangathana.

The event focused on rethinking the meaning of informal work by highlighting the importance of the role played by rag pickers and other unorganised sector workers in managing the garbage of our cities, and elucidated on the issues of marginalisation and the need of solidarities.

Referring to the recent recognition that the rag picker community has received due to the initiation of the Swachh Bharat Abhiyaan, Mhapsekar talked about the various issues that the rag picker community still faces at large, “There hasn’t been any guarantee of achhe din for us. There is an urgent need for all the workers to come together and aim at empowerment and collectivisation.”

The onset of private garbage collecting companies which has affected the professional dimensions of the rag picking work was also discussed. The onslaught of the incinerator which has reduced the demand of manual work load, lessening the income of the waste pickers formed a significant part of grievances.

Mhapsekar talked about the varied contributions of waste pickers to the society. “These people are always shooed away while doing their job, however, what we all fail to realise is that these very people are saving the taxpayers’ money by picking up waste on their head. There are more 2,500,000 waste pickers all over India and they send around 100,000 tons of waste for recycling.” The event also highlighted the issues of gender and caste in the profession.

Gautham, who desires to become the leader of the waste picking community, spoke about their long impending demands, “We want registration plus integration of every waste collector and provision of an identity card, police protection, shelter and an Aadhar card.” He said the major problems include transportation and storage of garbage and the lackadaisical attitude of the municipal corporations and the police-mafia nexus.

Emphasising the role of a waste picker in a society where the increase in income is directly proportional to increasing garbage, the event highlighted the need for up-gradation by teaching waste pickers novel methods like de-composting, decentralization and waste management to face the challenges better.

The workers laid stress on pursuing the path of inclusion by ensuring the acknowledgement of the role played by informal waste pickers (including itinerant waste-buyers) and informal waste recyclers (scrap traders, re-processors, etc.) in reducing and managing solid waste as well as contributing to socially inclusive, cost effective and environmentally sustainable waste management systems as mentioned in the proposed Solid Waste Management Rules.

Fact and fiction poignantly met when Koshy read an excerpt from her book aptly portraying the difficult lives of rag pickers, “Noor’s father was a kabadiwalla. He rode his bicycle from his home as early as seven thirty on some mornings. Change was important in Mohammad Saidullah’s line of work. When he finished weighing the goods – stacks of old newspaper, used up school notebooks, not a blank page left and the covers fallen apart, glass bottles empty of ketchup and liquor, metal tins sharp edged at the rim – and named what he was willing to pay to haul away these discards, the householders all claim that they have no change. If he quoted Rs.18, a fair price for a good sized load that would earn him at least five rupees more when resold to recycling factory, they would pocket his twenty and shake their heads ‘no’. They didn’t have two rupees change for him.”