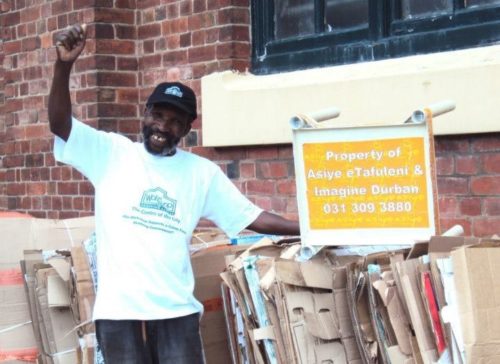 On the eve of 31 May 2016, renowned Durban informal recycler, Afrika Ntuli, shockingly passed away after being knocked by a motor vehicle at a pedestrian crossing near his place of work in the Central Business District (CBD) precinct. The news of the accident was conveyed by the police to fellow informal recycler, Maria Vilakazi, who was on his contact list on his recovered cell phone from the site of the accident – and since then, the news of the tragic event has spread and devastated all those that knew and loved the legendary informal recycler of the last 29 years.

Asiye eTafuleni (AeT) came to know of Afrika Ntuli since 2010, when it was commissioned by the Imagine Durban Project to implement its Cardboard Recycling Project. This Project sought to test interventions that would enhance the livelihoods of the prejudiced and marginalised activity of informal recycling in Durban’s inner-city and CBD.

Afrika and a group of up to 15 men and women cardboard recyclers were located around the landmark International Convention Centre (ICC) and Workshop Shopping Centre precinct making a living by collecting and selling cardboard recyclables generated by the industrial, retail and office activities there. Afrika emerged as a well-respected, liked and established informal recycler amongst his fellow recyclers and by the surrounding businesses – and was naturally elected as the lead representative of the informal recyclers in the area.

For the past 29 years, Afrika was managing the waste recyclables of numerous formal businesses, mostly within the Workshop Shopping centre. He was not only respected and popular amongst the formal business sectors which he serviced, but he was a consistent champion of women and youth that entered the sector as he took a number of them under his tutelage and negotiated on their behalf to work as informal recyclers.

As a result of his influential status, he was seen as a key figure in helping the South African Waste Pickers’ Association (SAWPA) organise informal recyclers in Durban. He was also a key feature at eThekwini Municipality’s annual Sustainable Living Exhibition from 2010 onwards as he educated and entertained visitors to the exhibition – by colourfully regaling his personal and the collective story of informal recycling in Durban.

This event fatefully follows last week’s story on informal trader leader, MaDlamini, who was a recent victim of a road accident in Warwick Junction highlighting the vulnerability of informal workers operating from public spaces to occupational health and safety hazards. Afrika Ntuli’s case again affirms the same point, albeit in the most devastating of ways – through the senseless loss of his life. A former project collaborator to AeT commented: “Losing him to a taxi accident is really so sad and it says so much about the lack of proper management of road use. This is just not how we should be losing people.”

For AeT, Afrika was instrumental in organising the participants of its Cardboard Recycling project and symbolised the vital contribution of the informal recycling sector to Durban’s green economy – as someone who had grown with and served the burgeoning local recycling industry since the late 1980s. His social, environmental and economic contributions within Durban are invaluable and will be remembered by many, and this is just one commemoration of his immense legacy. Siyabonga kakhulu Baba Afrika (we thank you Father Afrika).

Afrika Ntuli (far left) and Maria Vilakazi (centre) celebrating Global Recyclers’ Day on 1 March (2014) with their contribution of 1.5 tonnes of recyclables which amounts to saving 25 trees – with staff from a local recycling company. Photo: Tasmi Quazi.

Afrika after weighing and selling 1 tonne of cardboard recyclables (March 2012) seen wearing the Global Alliance of Waste pickers t-shirt which highlights the devastating socio-economic impact that waste incinerators would have on the livelihoods of informal recyclers. Photo: Dennis-Lee Stols.

Afrika, the star of the AeT Projects stall at the 2013 Sustainable Living Exhibition. Photo: Tasmi Quazi.

Clicks management at the Workshop Shopping Centre with Afrika, one of many retail stores that he serviced (April 2013). Picture: Tasmi Quazi.

Afrika with the then Priority Zone Officials operating in the ICC precinct, with whom he worked collaboratively to deal with any urban management challenges (March 2012). Photo: Tasmi Quazi.