Eugene Gadsden has been a canner for nearly 30 years. Eugene wanted to earn his own living instead of depending on the soup kitchen. Thus, together with Sister Ana Martinez de Luco he helped found Sure We Can, a non-profit redemption center in Brooklyn, New York.

The canners who belong to the organization collect the containers and redeem cans and bottles for 5 cents each. For Eugene Gadsden, canning is an honest way of living”. Canning has become a source of livelihood for many workers. As Eugene notes, “it’s job like any other”, with its own set of responsibilities and demands.

This interview (video available) is part of a scoping exercise in NYC carried out on July 12, 2016 by WIEGO´s waste specialist Sonia Dias, as part of the series Scenes from the Heart of Recycling. 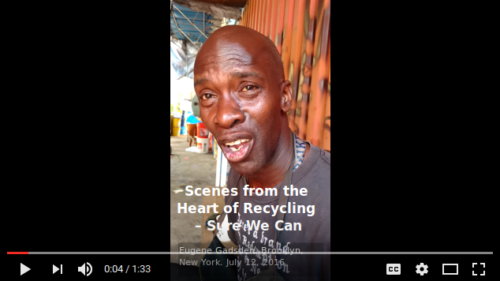 Tweet
| Inclusive models | Tags: Scenes from the heart of recycling
Comments Off on 30 years as a canner in New York
Comments RSS feed for this post.
Loading Comments...