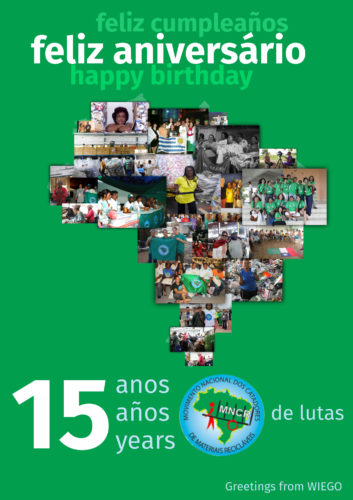 What are the possibilities when it comes to transforming waste? How can a city respond to the dreams of social belonging of those who make a living from the leftovers of our voracious consumerism? These were some of the questions that fueled the struggle around waste and citizenship that led to the founding of the national Waste and Citizenship movement, 15 years ago.

The First National Conference of Waste Pickers and the First March of Street Populations in June of 2001 in Brasilia marked the birth of the National Movement of Waste Pickers in Brazil. The organizing efforts of the waste pickers towards a larger movement was built upon the creation of the first waste pickers organizations in the south and southeast of Brazil in the late 1980s, such as Coopamara, Asmare, and FARRGS, in the late 1980s – a few of which were the result of social and educational projects by the Auxílio Fraterno and Pastoral da Rua organizations. Since its birth, the national movement has advocated for solidarity and had a strong connection to social movements representing street populations.