National Safai Karmachari Finance & Development Corporation (NSKFDC) has decided to include wastepickers as target group for providing financing and self-development skills. This decision was taken on the direction of Union Ministry of Social Justice and Empowerment (MoSJE).

On 1st June, 2016, Ms. Anita Agnihotri, Secretary, MoSJE met the representatives of Alliance of Indian wastepickers, a national coalition of wastepickers organizations, in Delhi. An idea of including wastepickers in the financing and self-development schemes extended to Safai Karmacharis (sanitary/health workers) by the Ministry was floated. Following the workshop, alliance members and representatives of MoSJE and later, NSKFDC interacted continuously with discussion on inclusion. References to Solid and Plastic Waste Management Rules, 2016 notified by Ministry of Environment, Forest and Climate (MoEFCC), which prescribe integration of wastepickers in solid waste management of cities were made.

On 29th August, 2016, wastepickers were included as target group in the Article of Association of NSKDFC, after the approval for amendment in the rules of NSKFDC by the Ministry. The schemes related to financing and skill development are undertaken by NSKFDC, an apex corporation set up by Government of India and channelized through state channelizing agencies nominated by state and union territory governments, nationalised and regional rural banks.  In Karnataka and Maharashtra, Dr B. R. Ambedkar Development Corporation and Mahatama Phule Backward Class Development Corporation are respective channelizing agencies. Similar agencies are nominated in other states by the state governments under the aegis of Social Welfare Development.

The schemes extended include financing: cheap credit at an interest rate 4 % per annum for expanding livelihood and higher educational opportunities; technical, vocational entrepreneurial training. Schemes particularly related to financing i.e. cheap credit will be beneficial for wastepickers as they are entrepreneurs and require credit to expand their micro-enterprises. An additional 10 percent of total allocation of NSKFDC for financial year 2016-2017 has been made for wastepickers, without diluting the benefits of another target group.

Following this decision, a workshop on 14th October, 2016 was held in Delhi to discuss various training programmes and financing schemes offered by NSKFDC for wastepickers’ organizations. Mr. K. Narayan, Managing Director (MD), NSKFDC and Ms. Aindri Anurag, Joint Secretary, Department of Social Justice & Empowerment with other representatives of the corporation and MoSJE informed the participants about schemes and training programmes undertaken. To ensure that skill development training relevant to wastepickers is commenced, NSKFDC is in constant conversation with the alliance. 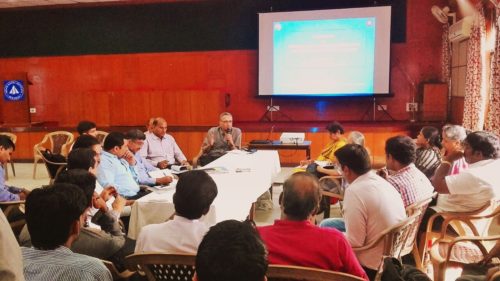 Mr. K. Narayan, MD, NSKFDC in the workshop hosted by the Alliance of Indian Wastepickers.

After the workshop NSKFDC has written to Social Welfare Department of all states and union territories, to inform it about the existing agency (agencies) authorized for declaring a person ‘wastepicker’ or ‘waste collector’, and ‘whether existing state channelizing agencies nominated by the state government for implementation of NSKFDC schemes will also disburse funds to identified wastepickers other than notified target group of safai karmacharis and manual scavengers’. Once the queries are answered by the respective Social Welfare Departments, the process for inclusion will begin. This has been the second major achievement of wastepickers, after the prescription of their inclusion was made by MoEFCC in Solid & Plastic Waste Management Rules, 2016.

The copies of interaction between representatives of Alliance of Indian Wastepickers and NSKFDC are provided in the links below: