Indore, Mysuru, Panvel and Tumakuru are other four cities which have issued ID cards to wastepickers this year. 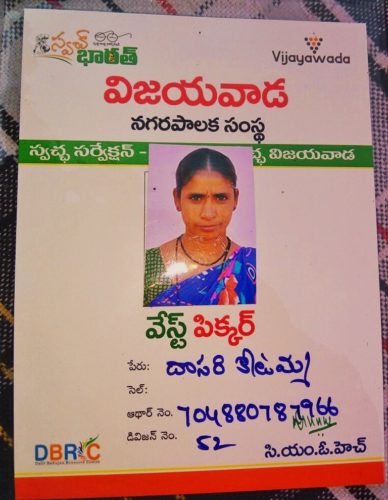 Vijaywada Municipal Corporation issued occupational identity cards (IDs) to the wastepickers. Vijaywada is first city in Andhra Pradesh to do so. Corporation has issued 100 identity cards today. In the days to come the number will reach the approved figure of 486. This was done after consistent efforts made by Dalit Bahujan Resource Center (DBRC). Chief medical health officer is issuing authority of cards in Vijaywada. Vijaywada is the fifth city in India, which has undertaken the prescribed inclusionary measure this year. Bangalore, Kolhapur, Nelamangala and Pune, Pimpri- Chinchwad, Srinagar are the other cities which have the occupational IDs issued to wastepickers since past many years.

Similarly, Mysore ranked as first- in terms of cleanliness or the cleanest city in India, is fourth city in Karnataka to issue occupational identity cards to the wastepickers. 220 identity cards have been printed and issued by the city corporation in September, 2016. In Mysore, occupational identity cards carry the logo of Mysuru City Corporation and are signed by both commissioner and health officer. Same goes for Tumakuru, which too has issued them earlier this year.  Issuance of IDs has been facilitated by Hasiru Dala. The organization in past undertook the survey of wastepickers in both the cities of Karnataka.

Municipal authorities are showing urgency in issuing ID as the Swachh Bharat Abhiyaan (Clean India Campaign) guidelines mandate integration of wastepickers in solid waste management and allotted 29 marks for issuance of occupational IDs to wastepickers for the upcoming Swachh Bharat survey next year. The issuance of cards has been a long pending demand of Alliance of Indian Wastepickers and its members. It has also been prescribed in Solid Waste Management Rules, 2016.  It is a pleasure to see it unfolding smoothly.