The Mbeubeuss garbage dump has again caught fire. In 2012, the village of Gouy-gui experienced a similar fate as raging flames caused significant damage. But this Thursday, December 22, 2016, the fire caused enormous devastation and, in the unanimous opinion of waste pickers, both male and female, such a disaster fire has not seen since they started working in the dump in 1968. The entire village of Baol, the second and largest area of the dump site, was consumed. 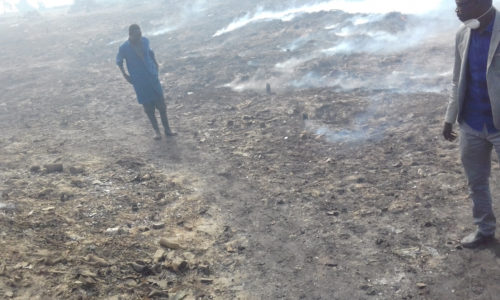 The seat of the fire continues to burn

The consequences are enormous. To date, 3 people, including a woman, have lost their lives and others are reported missing. The President of the Local Development Committee and municipal councilor of Malika, present on the scene, looking sad and dejected, cannot find her little brother who works and spends the night in the dump. Women, men and young people seemed confused and did not know what to do in the face of this catastrophe.

According to Harouna Niasse, Secretary-General of the Wastepickers Association, Bokk Diom, the area caught fire and surprised his workmates. They had almost no time to save their booty stock piled in places and ready to be sold to buyers or resellers. Such is the case of Mbaye Fall, a member of Bokk Diom’s board of directors, who lost 20 tons of plastics, and Tabaski Ndiaye, one of the biggest scrap collectors in the dump site, who also lost two-thirds of his products. 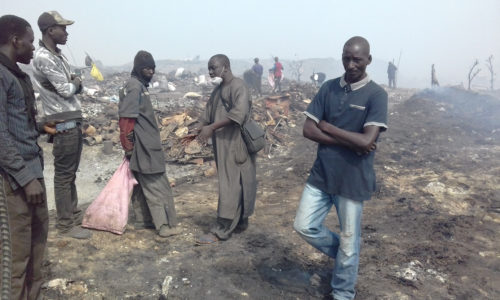 The causes of the fire are yet unknown. However, some waste pickers are already pointing the finger at the Waste Coordination and Management Unit (UCG) set up by the State of Senegal, accusing it of having practices that favor some people since it has created uncontrolled mini waste depot platforms and because these beneficiaries of these platforms often set garbage on fire that creates the seat for major fire outbreaks.

Informed of this calamity, Momar Talla GADIAGA, the Mayor of the Commune of Malika, accompanied by local councilors, rushed to the site to witness this tragedy and to support the waste pickers. Moved by the Mayor’s show of empathy, the waste pickers invited him to their headquarters, the Mbeubeuss Community House, for discussions and report to him on the situation. On behalf of the municipality, the Mayor made a food donation to the Association as well as substantial financial support to console them while recommending that they organize in order to better assess the damage and find a bailiff who will make a finding of facts and draw up a report.