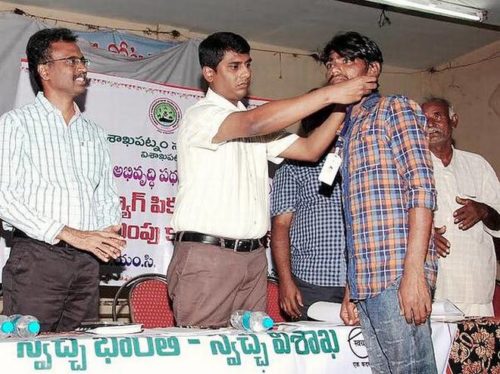 GVMC Commissioner Harinarayanan putting an identity card around the neck of a rag picker at a programme at Gnanapuram in Visakhapatnam on Monday. | Photo: The Hindu

Their services will be utilised for collection and segregation of waste

Greater Visakhapatnam Municipal Corporation (GVMC) Commissioner N. Harinarayanan has said measures will be taken for improvement of the living conditions of rag pickers under GVMC limits.

The Commissioner distributed identity cards to rag pickers at a programme organised at Maria Das Kalyana Mandapam at Gnanapuram here on Monday. He said the rag pickers were doing a great service to the GVMC and the public by collecting plastics from the waste at the dumping yard. They would be provided skill training to achieve the target of Swachh Bharat Mission and provided self-employment.

Mr. Harinarayanan said their services would be utilised for collection and segregation of dry and wet wastes. Plans were also on the cards to organise them into groups and provide loans to them through the ‘Subratha Swatchanda Samstha’ and steps would be taken to educate their children.