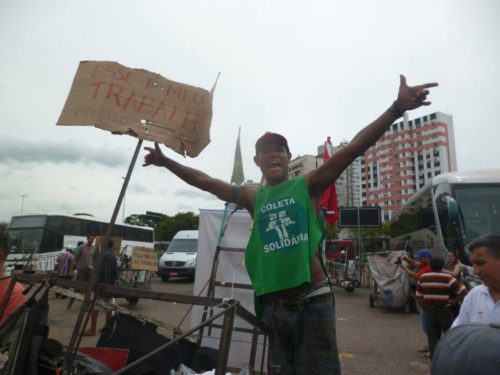 Sign reads “This is my work. I need it to sustain my grandkids.” (Photo credit: Manuel Rosaldo).

Last Friday, however, Porto Alegre earned a more ignominious distinction: it became the first Brazilian city to ban the use of pushcarts, effectively criminalizing the work of thousands of street waste pickers who rely on pushcarts to ply their trade. The law, which also bans another preferred tool of waste pickers, horse carts, was first approved in 2008, but not scheduled to take effect until 2016. In the interim, the city was to provide training and resources to help waste pickers transition into alternative professions. However, a 6-month delay was granted in the implementation of the law in recognition of the fact that the city never provided the promised resources.

The ban threatens the survival over 7,000 vulnerable families who eke out a living from street waste picking, in the midst of record-breaking unemployment. This represents nothing less than a human rights crisis. It violates waste pickers’ right to work and threatens their right to food, clothing, and shelter, as stipulated in Articles 23 and 25 of the Universal Declaration of Human Rights and articles 4, 5, and 6 of the Brazilian Constitution. Notably, waste picking, including “the use of horse carts and push carts,” has been recognized as a legal profession in Brazil since 2002, as detailed in Code 5192-05 of the Brazilian Classification of Occupations. 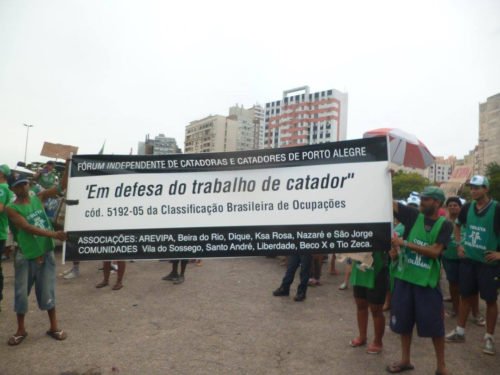 I am a sociologist from the University of Berkeley in California who has conducted extensive research on inclusive waste management policies in Brazil, Colombia, and the US. Last week, Brazil’s National Movement of Waste Pickers and Porto Alegre’s Independent Forum of Waste Pickers invited me to Porto Alegre to serve as an international human rights observer during the days before the new law took force. I visited five of Porto Alegre’s vilas (informal neighborhoods), where I gathered testimony from 25 street waste pickers, not one of whom had been included in the city’s programs to retrain them for alternative professions.

On Thursday, March 9, I accompanied several hundred waste pickers as they marched to demand the right to continue in their profession and to be recognized and remunerated for their work. First, we marched to the City Council Building. To my surprise, City Council administrators, who had insisted to have no time to speak to us just hours before, received us warmly in a large auditorium. The 12 leaders of the Council, each of whom represented a different political party, addressed us one by one, expressing sympathy for the waste pickers’ cause and critiques of the cart ban. Then, we marched to the mayor’s office, where a surrogate of the mayor promised that the police would only use “educational” and not “punitive” measures against street waste pickers. 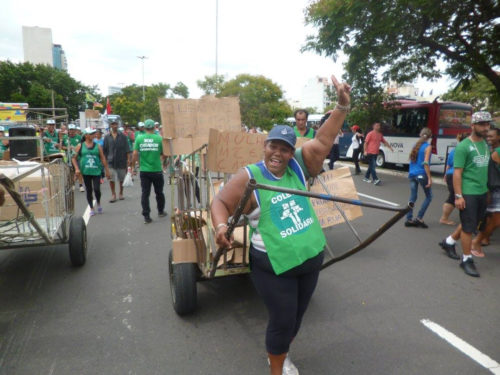 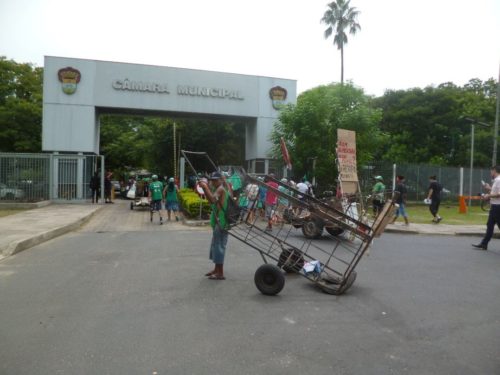 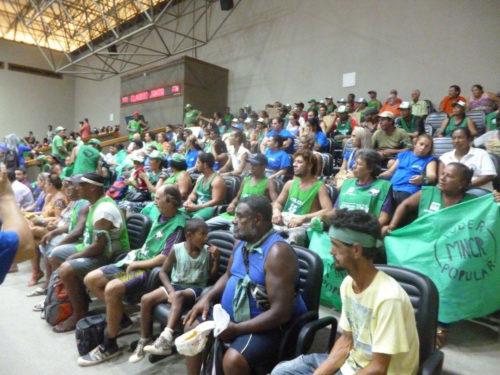 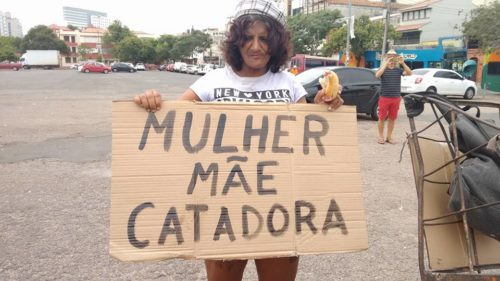 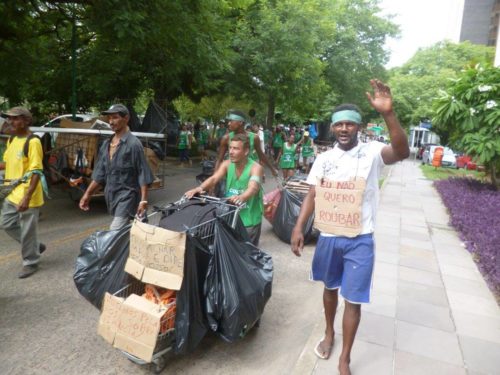 Signs read “I Don’t Want to Rob,” “Working on the Street is Our Right,” “We Are Fighting for Our Survival.” (Photo Credit: Manuel Rosaldo).

To be sure, the sympathy demonstrated by public officials was a positive development. Nonetheless, the ban remains on the books, and despite the mayor’s promises, several street waste pickers claim to have been harassed by police in Porto Alegre last week. More troubling still, in the midst of a rightward lunge in Brazilian national politics, public authorities in several cities appear to be cracking down on street waste pickers. Policy makers in cities such as Belo Horizonte have proposed copycat laws to Porto Alegre’s pushcart ban. In São Paulo, in contrast, no law was passed against waste picker carts, but police nonetheless confiscated several waste picker carts in the city center on the week of March 20, 2017. Also that week, city authorities served eviction notices based on alleged ground use violations to São Paulo’s two remaining street waste picker associations, where over 250 waste pickers store their carts and collectively sort and sell their materials.

Organized waste pickers in Porto Alegre are seeking dialogue with authorities and support from communities. However, if public authorities do not repeal the law, the waste pickers are prepared to take more drastic measures such as blocking major city throughways. As one waste picker said, “if carts can’t circulate, neither will cars. If we can’t work, no one will.” Given the fact that similar protests broke out last July, this should not be taken as an idle threat. 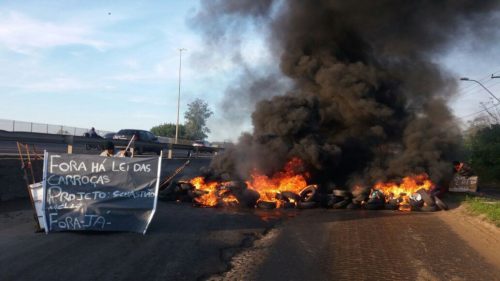 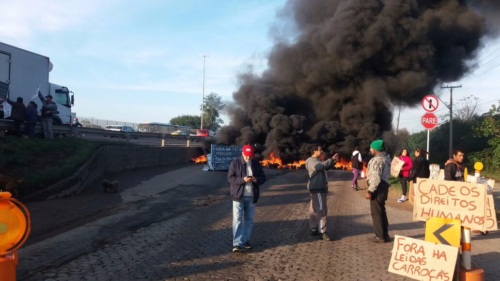 Signs read “Where are our Human Rights?” “Out with the Cart Ban.” Photo Credit: Ana Paula da Silva Junkherr.

Unfortunately, attempts to criminalize street waste pickers are commonplace throughout the world. Their results are predictable: they never succeed in wholly eliminating waste pickers, only in exacerbating their marginality, poverty, and persecution. Often, powerful economic interests lie behind such efforts, such as developers who seek to remove informal workers from urban landscapes in order to increase property values, or private waste companies who want to monopolize the wealth that can be extracted from the city’s waste. But also, many people may support the laws due to honest misunderstandings about waste pickers and their role in society. Below, I challenge some of the most common such myths, and highlight policies that could improve recycling rates and the livelihoods of waste pickers. This list is inspired by a similar list that appeared in the book The Wolrd’s Scavengers: Salvaging for Sustainable Consumption and Production (2007) by Martin Medina.

2.) “Modern” cities do not have street waste pickers. Waste pickers work in virtually every major city in the world, including those of the Global North. Indeed, 21 countries across North America Europe, and Asia even incentivize informal recycling through “bottle bills.” These countries levy small taxes on bottles and cans, which are used to pay waste pickers or consumers for returning the materials to official recycling centers. My home city, San Francisco, California, possesses among the most advanced recycling technologies, regulations, and public education programs in the world. Thanks to the bottle bill, it also has thousands of waste pickers, though they are rarely recognized for their contributions.

3.) Waste pickers are not efficient. In an article titled “The Efficiency of Informality,” Environmental Scientist Sintana Vanegas and colleagues compared the reduction of greenhouse gases generated by street waste pickers in Bogota, Colombia to hypothetical reductions generated by private recycling companies. They found that street waste pickers far outperformed private companies due primarily to the fact that they not only recycle, but they also salvage many items from waste to reuse or sell.
4.) Street waste pickers cause traffic: Traffic is caused by poor urban planning and insufficient public transportation, not by waste pickers, who have as much of a right to the road as anyone else. One way to relieve congestion, however, is by expanding bike lanes, which not only incentivize people to bike, but also are utilized by waste pickers and street vendors.

6.) Waste pickers are delinquents and criminals: Quite to the contrary, several studies have shown that recycling helps very poor people avoid turning to crime. For example, economist Bevin Ashenmiller tracked crime rates in 10,000 North American cities from 1973-2001. She found that rates of petty larceny went down when cities began to implement “bottle bills” that incentivized informal recycling.

8.) Street waste picking is just about the worse profession that exists. Many of the waste pickers whom I interviewed in Porto Alegre and other cities report earning over one minimum wage. Many had worked in low-income formal jobs previously, but preferred recycling where they experienced increased earnings, job security, flexibility, and workplace freedom.

9.) It is not possible to improve the work standards of waste pickers who work on the street. Many cities have found ways to recognize and remunerate the work of street waste pickers. For example, in Bogotá, Colombia, city officials identified 18,000 street waste pickers through a census process and distributed city uniforms to them in recognition of their public service. Also, Bogotá makes bimonthly payments to 13,000 waste pickers based on the quantity of materials they sell to registered scrap dealers. The city pays waste pickers via text messages with codes that are redeemable at ATMs.

10.) Waste picking is a source of vulnerability. Informal recycling is a resource that vulnerable populations created over several generations, a feat of great ingenuity. The sources of waste pickers’ vulnerability are broader structures of class, gender, and race-based oppression, as well as state ineptitude, exclusion, and persecution. The solution is more just social policy, not criminalization.