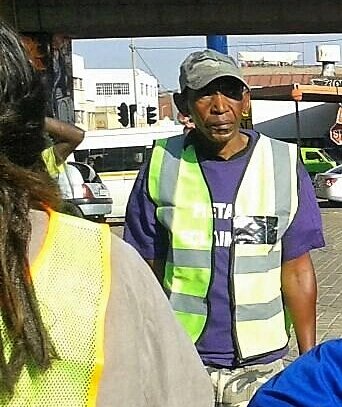 Reuben Sandile Oupa Mbambisa, a 52-year-old waste picker/reclaimer and active member of the Johannesburg Reclaimers Committee, was brutally murdered in the early hours of September 12, 2017 at the spot on the street that he called home. It is believed that his murder resulted from an altercation on September 10th when he intervened in a fight between a boyfriend and a girlfriend.

Reuben was born and raised in Kagiso Township, South of Johannesburg. He worked for several different companies including the South African rail company, Spoornet. After losing his last formal job, he turned to informal recycling and moved to the city in 1988. He lived and worked on the streets of Fietas, an area on the fringes of a predominantly Indian suburb west of the Johannesburg central business district.

An active leader always willing to serve others

In June 2017, Reuben was elected by Fietas reclaimers to represent them in the Interim Joburg Reclaimers Committee. The Committee was established in an effort by reclaimers to put together a collective response to a move by the state-owned Pikitup – the official waste management service provider for the City of Johannesburg – to contract out the separation of recyclable waste-at-source services to private recycling companies. The new separation-at-source contracts, which came into effect on 1 July 2017 threatened to put reclaimers out of work virtually overnight.

Reclaimers responded with a campaign, including public protests and media appearances, to bring attention to their struggle. Reuben was among the leaders of the historical reclaimers’ protest march on July 13, 2017 in Johannesburg. Always willing to lead and serve others, he volunteered as the first-aid marshal on the day of the march and was a strong voice in opposing the separation-at-source program which threatened waste pickers’ incomes. In a manifesto Reuben penned in July 2017, he wrote:

“On behalf of all abagerezi we are really not happy about the municipality wanting to take over our means of putting bread on the table, not to mention paying rent and sending our kids to school. […] The only thing the municipality is thinking of doing is take away our last hope of survival.”

Following the historic march, reclaimers in Johannesburg made progress with the City: the Managing Director of Pikitup put a halt on signing any new contracts with private companies, acknowledged reclaimers as key stakeholders in the city’s waste economy and agreed to meet with them. Reuben was nominated as one of the speakers to address the meeting with city officials one week after the march.

During the meeting, Reuben spoke about reclaimers’ difficult living and working conditions, in line with his July 2017 manifesto:

“Life is very difficult for us as abagerezi. Some people think that we’re lazy and all that, and is not like that. We are roaming the whole of Jozi not being sure that we going to collect enough of the recycling material. […] Some of abagarezi are homeless while there’s unused land. […] Some of the recyclers amongst us are illiterate, some of us never set foot in school premises before.”

Despite the challenges, Reuben was a strong believer that informal recycling was a dignified way of making a living and should be recognized and supported by the City of Johannesburg:

A waste picker organizer who understood the power of coming together 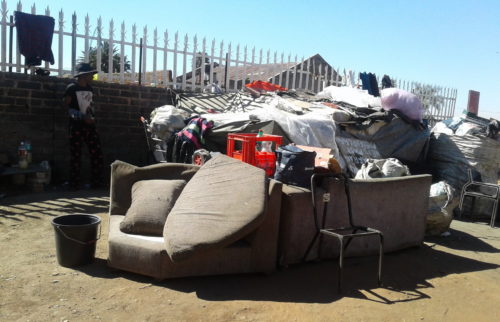 Reuben was among the workers who took a decision to form the African Reclaimers Union to give reclaimers in the city of Johannesburg a collective voice in their struggle for recognition as workers providing a valuable environmental and public service. He attended his last Reclaimers Committee meeting on September 9th to discuss his community’s participation in a clean-up campaign planned for September 13th in the area where he stayed. Sadly, that was the last day that his comrades would see him alive. Though he died far too soon, his memory and exemplary leadership live on.