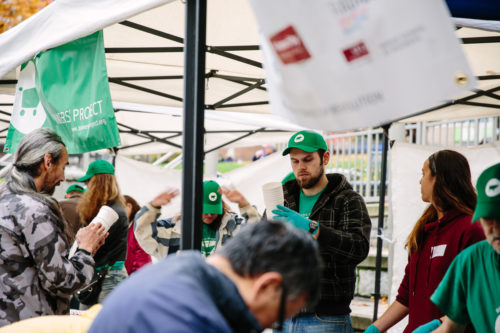 Every week, in Vancouver, Canada, 2.6 million coffee cups are sent to landfills instead of being recycled properly.

On October 16, 2017 the Binners’ Project hosted its fourth annual Coffee Cup Revolution in Vancouver, British Columbia – a one day pop-up depot where binners could return coffee cups for a five cent refund. (Binners is the preferred term for ‘waste-pickers’ or ‘dumpster divers’ in Western Canada.)

Through the Coffee Cup Revolution, binners have fostered a larger discussion on how we can address this problem in a way that recognizes the important role binners are playing keeping the city clean and managing waste streams.

At the end of the day, 53,783 coffee cups were collected, breaking last year’s record of 49,060. The depot was exclusively run by and for binners. The income opportunity for binners amounted to $2,689.15 in one day.

Binners’ Project is a group of waste-pickers aided by support staff dedicated to improving their economic opportunities, and reducing the stigma they face as informal recyclable collectors.