The State of Waste-pickers Turned Sanitary Workers in 2nd Cleanest City of India: Irregular Salaries, No Occupational Safety Gear and No Medical Leave

The story of the second cleanest city in India-Bhopal and those who keep the city clean. 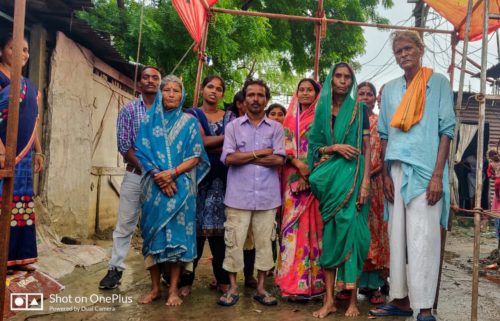 The story of waste-pickers who became sanitation workers in Bhopal.

The waste-pickers turned sanitary workers (Safai Karmacharis) in Bhopal are ill-paid, salary is irregular. They work for long hours and have no provision of medical leave. If skipped the day of work on the account of sickness, an amount of INR 100-200 is immediately deducted from the salary. They are not being provided with any occupational safety gear, many workers showed bruises and cuts on their hands, thanks to the presence of glass and blade in unsegregated waste.

In 2013, the municipal corporation decided to take over the door to door collection, along with that they got the sanitation workers on its payroll. Over a period of time, the city authorities increased their salary from INR 3000 to around 7000. In hand after unknown deductions, sanitation workers receive around INR 5090 to 5200. The payment of salaries is quite irregular. A few days back, sanitation workers went on strike due to non-payment of salaries for three months. Within a few days, the salary of one month was released and they were told that the rest of the two months salary will come in instalments. There are no holidays, if one gets sick and takes a leave, there is an immediate deduction made from the salary. There is no medical support or occupational safety gear provided.

Their employment itself is a grey area. The city authorities have not issued any occupational identity card for its workers, there are sketchy plans to do so. They have to report at work from 6-7 in the morning and the collection goes on till 2 in the afternoon. They have been provided rickshaws to do the collection. Within the same time, they have to empty their rickshaw in the moving truck and continue door to door collection. Most of the times, the truck is delayed and they have to wait for it to come till 4 in the late afternoon or 6 in the evening, extending the 8-hour shift to almost 10-12 hours.

Even though segregation is mandatory, the sanitary workers are given unsegregated materials. The municipal authorities ask them to segregate the collected material. They segregate the material and deposit it in the moving small trucks, put in place for collection. Later while transferring to the compactor, everything is mixed up again.

Impact of the announcement of Single-Use Plastic Ban

Their meagre and irregular earning makes them dependent on dry waste (recyclables) retrieved from the collection. Since the announcement of Single-Use Plastic Ban and lack of clarity about the items to be banned, even the prices of material with a high rate of recycling have gone down from INR 30/kilograms to INR 10/kilograms. This has created havoc across the country in the waste (recycling) markets. According to Sunita Rani (name changed), ‘पहले नोटबंदी करके हमारा बुरा हाल किया अब कबाड़ बंदी करके हमारा वही हाल है। (Pehle Notebandi Karke Hamara Bura Haal Kiya Ab Kabadbandi Karke Hamara Wahi Haal Hai) -Translation: First our condition became deplorable thanks to Notebandi (demonetization) and now it is because of Kabadbandi (single-use plastic ban). Taking the strand of conversation further, Har Narain (name changed) said ‘we still have some employment and income, imagine the condition of our kabadi (waste-picker) brothers and sisters, who are completely dependent on recyclable plastic material for their livelihood’.