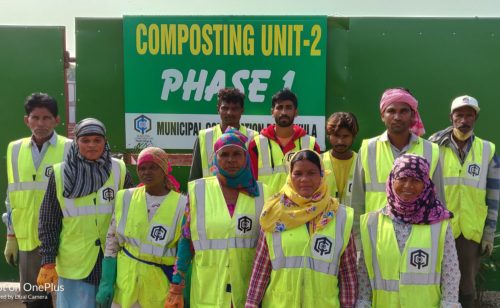 Last year in July, I received a phone call from Mr. Rajesh Kumar, Commissioner, Municipal Corporation, Panchkula (a town in the North Indian province of Haryana). As much as I like to work with municipal officers, it is very rare for me to receive such phone calls. He informed me that they are preparing a delegation of wastepickers from their city. The wastepickers are currently picking waste at the dumping site. They want them to move out and have a better occupation. On their part, Panchkula Municipal Corporation had already issued occupational identity card to most wastepickers working in the dumping site. To showcase that there are alternative vocations out there. They wanted the delegation to visit Bangalore and learn about the integration of wastepickers undertaken by Bangalore municipal corporation and Hasiru Dala. He told me that they can manage the travel (air travel in this case). Is it possible for us to host the wastepickers and show them the work done in Bangalore? No municipal corporation has reached out to the Alliance of Indian Wastepickers with such a request. We jumped at the opportunity and said yes. The wastepickers from Panchkula flew down to Bangalore. Learned about our work and went back. They were enthusiastic. They wanted to do something similar in their own city.

To our sheer luck, the Alliance received support from National Safaikarmacharis Finance & Development Corporation (NSKFDC)to institute a fellowship for creating leadership amongst wastepickers. Recognizing the potential in Panchkula, the Alliance members decided to award the fellowship to one of the wastepickers in Panchkula, Kailash. Closer to the end of last year, Kailash joined Stree Mukti Sanghatana, Mumbai, as a fellow. He learned different aspects of organizing, various methods of composting. After spending a month in Mumbai, he went back.

He joined the efforts of municipal authorities to manage organic waste. With few initial hiccups, he managed to stay through. Today, he along with his 40 other colleagues left wastepicking in the dumping site and completely moved into organic waste management. Panchkula generates around 117 tons of waste every day. 70 tons of waste is organic. Segregation of waste is enforced. Residents of the city have not yet fully come around the idea of segregation. Mixed waste is still arriving. The wastepickers have to manually separate out the dry and reject waste from the wet waste. The municipal corporation is running awareness generation campaign to better segregation levels.

More than half of the organic waste is managed scientifically. Substantial part of it is sent to a bio-methanization plant in Ambala. Around 10-15 tons of organic waste is composted within the city. Kailash and his colleagues are the composters of the city. They manage 3 composting plants. The oldest one is more than a year old. The compost is sent to the nurseries of the municipal corporation. The wastepickers are on the payroll of municipal corporation and receive a salary of INR 12727 per month. They contribute to Employee Social Insurance and Provident Fund. The municipal corporation provides the occupational safety gearWhen I asked them: isn’t this safety gear a little comfortable? One of them responded saying ‘this our uniform, this our pride.’ The municipal authorities on their part have been very strict in enforcing that workers wear the gear and provide it on regular basis. 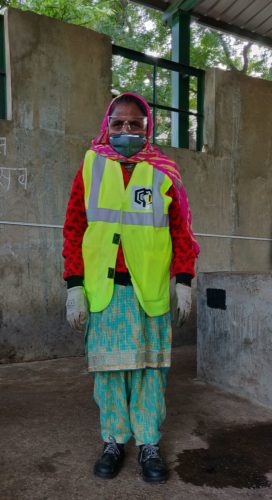 There are around 40-50 wastepickers still on the dumping site. The flow of organic waste to dumping site has reduced. It is receiving dry and reject waste. The wastepickers at the dump site are retrieving dry waste from the arriving vehicles. After managing the organic waste, the corporation is planning to set up a material recovery facility (dry waste collection centre) and has a plan to involve wastepickers who have not yet been integrated in the system.