A typical day of Rachna Devi, a 22-year-old waste picker in Mussoorie, a hill station in the Garhwal Himalayan range, begins with looking after her family of six, doing household chores before leaving for work at noon. ‘I have picked and sorted waste from the streets all my life. My parents were in the same profession and I kept picking waste even after marriage for an income of Rs 4000/month. I studied till 5th standard. Who will give me work now even if I decide to do something else?’  Rachna Devi is one of the 35 waste pickers in Mussoorie who pick up recyclables from the streets and corners of the city.

Waste picking, which comes at the bottom among all urban informal occupations, requires no formal education. But picking waste certainly requires mental alertness and knowledge about the types of waste and recyclables and their economic value. Many important national policies and laws recognise the efforts of the informal workers working in the recycling sector, one of them being Solid Waste Management (SWM) 2016 rules that prescribe integration of informal recycling sector workers such as waste pickers in the solid waste management processes and initiatives of the cities. The Rules, in particular, recommend that integration can effectively be achieved by ‘organising them into Self Help Groups (SHGs) or cooperatives, to capacitate them to work as entrepreneurs in a business entity.’ 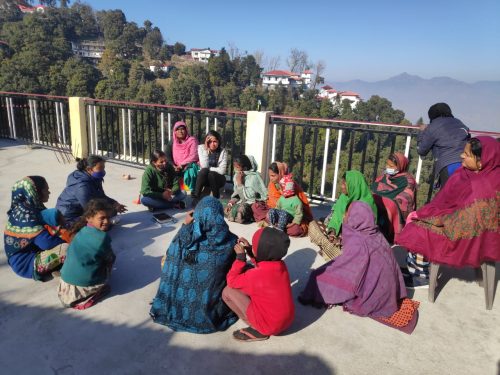 Self Help Group meeting in progress

Rachna Devi like many others belongs to this informal workforce that keeps our cities clean and healthy and contributes to the local economy, community health and environmental sustainability. Currently, 25 women earn their living by picking waste from the streets of waste pickers in Mussoorie. The spread of the Covid-19 pandemic and subsequent lockdowns worsened their economic condition as the lockdown forced them to stay indoors, taking them away from the streets, their place of work. They lost their livelihood during the lockdown and were dependent on the credit from the community shopkeepers for their survival.

It was in this time of crisis, Hilldaari* team was preparing plans to help informal women workers: waste-pickers by giving access to markets, public space and waste. Hilldaari is an initiative, supported by Nestlé India, and implemented by Stree Mukti Sanghatana and Recity Network Private Limited, to develop inclusive, contextualised and resilient models for solid and plastic waste management, in the tourist cities of the country. The campaign aims to facilitate the diversion of waste from landfills and is aggressively working towards the professionalization of sanitation workers and waste pickers through a collaborative approach with urban local bodies, citizens, contractors, sanitation workers, waste-pickers and representative bodies.

During the prolonged interactions with the waste-pickers, the Hilldaari team realised that the waste-pickers are unorganised and there is a need for stable income sources. We started organizing the women waste-pickers into a Self Help Group as that would act as a catalyst for the betterment of their life and livelihood. 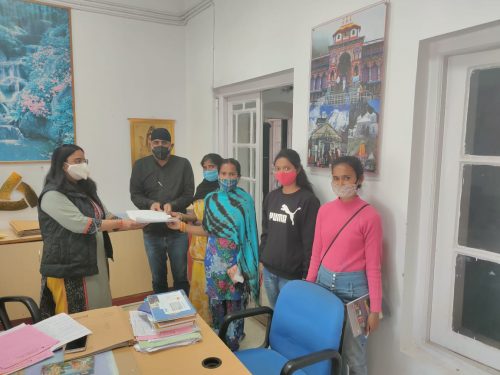 Self Help Group of waste-pickers opening their bank account

‘We held several meetings with the women waste pickers to share information about SHG and motivate them into forming one. With persistent efforts, the women eventually agreed to participate and thus Gaddi Khana Self Help Group, named after the area they reside in, was founded in Mussoorie in October 2020 with the support from the municipal council and state authorities.’ reflection shared by Arvind Kumar Shukla, Project Lead- Hilldaari Mussoorie. He has been instrumental in the founding of the first-ever women SHG in the city.

Recently the SHG has been linked with the Deendayal Antyodaya Yojana-National Urban Livelihoods Mission (DAY-NULM) Ministry of Housing and Urban Affairs Government of India. Under this scheme, the group will receive a monthly amount of Rs 10, 000/- in their SHG bank account.  NULM is a government flagship programme whose objective is to reduce poverty and vulnerability of the urban poor households by enabling them to access gainful self-employment and skilled wage employment.

‘The SHG formation and linking with NULM will enable women to waste pickers to do individual savings and support them in initiating alternate economic activity to enhance livelihood options. I wish them all the best.’ said Sunil Thapliyal, official-State Urban Development Authority, Nagar Palika Parishad Mussoorie.

2020 has been quite tough on the women waste-pickers in Mussourie. At the same time, there is some hope for a better and secure future The SHG plans to start multiple waste collection and sorting units. They are also hopeful of creating an enterprise of souvenirs for the tourist population in the city and for reducing their dependence on waste picking. Following the promise of alternative livelihoods, the first training in natural soap manufacturing was organized in February 2021. 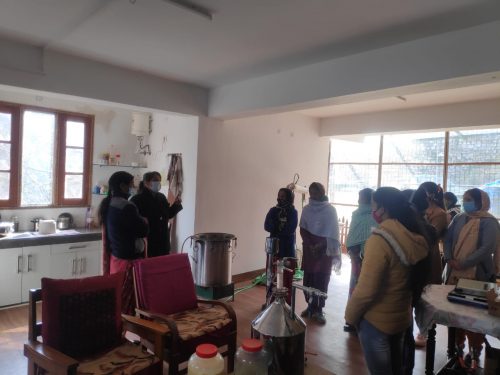 Arvind Kumar Shukla, Project Lead Hilldaari Mussoorie applauded the enthusiasm of the women waste pickers and shared plans for the SHG, ‘We will ensure that more government support comes to these women and will keep trying to get them the best possible resource persons to teach new skills.’

In addition to the SHG group, Hilldaari team has focused its efforts on the health and hygiene of women workers. Various sessions of breast cancer awareness and maternal health have also been organised and many other sessions planned for the future. ‘We believe that the concerns of waste pickers deserve special attention and are hopeful that these sessions will bring in the desired awareness for their overall well-being, said Jyoti Mhapsekar, President of Stree Mukti Sanghatana, a four-decade-old organisation working for women empowerment in India.

*Hilldaari is an initiative supported by Nestlé India to develop inclusive, contextualised and resilient models for solid and plastic waste management, in the tourist cities of the country. It is currently implemented in the hill cities of Mussoorie, Nainital & Dalhousie by Stree Mukti Sanghatana with Recity Network Private Limited as the technical partner. The initiative is facilitating the diversion of waste from landfills and is working towards the professionalization of workers in waste management: informal waste collectors, sanitation workers and waste- pickers, through a collaborative approach with municipal councils, citizen, contractors, sanitation workers and waste-pickers and influencers. Hilldaari has so far diverted 6284 MT of waste from landfills and professionalised 284 waste workers across the 3 locations. The project plans to expand its impact to three new cities in 2021.