The City of Johannesburg has just announced the withdrawal of the R50 recycling fee following the African Reclaimers Organization petition which had over 3600 signatures and demanded that the City of Johannesburg and Pikitup put an immediate stop to the R50 recycling fee and also developed a reclaimer-based recycling system through consultation with reclaimers.
After a big mobilization with several allies helping to spread the word, the petition was not only successful but got 3.600 signatures — 600 more than its original goal of 3.000.

They’re only 300 signatures away of the 3,000 goal! Sign the African Reclaimers Organisation’s petition that calls on the municipality to stop the R50 levy and create a reclaimer-based recycling system through consultation with reclaimers. https://t.co/mKvdyoTdze

The Global Alliance of Wastepickers (GLOBALREC) stands with all recyclers around the world and celebrates the importance of this victory.

Why is this important?

Starting from 1 July, residents living in houses worth more than R350 000 could potentially pay a R50 “recycling fee” if the City of Johannesburg’s proposed waste management tariff is approved.

The City said that the R50 additional levy will go to Pikitup to extend a separation at source (S@S) programme which has already been piloted in a few suburbs in Johannesburg.

Not only does this recycling fee raise more questions and concerns for residents, but it is also a serious threat to the livelihood of reclaimers who depend on the collection of recyclables for their daily living. The extension of this project will decrease reclaimers’ access to bins which will significantly decrease their income.

Reclaimers collect between 80 – 90% of used packaging collected for recycling, saving municipalities millions of rands per year. The contribution of reclaimers cannot be overlooked or underestimated.

You can read the full statement released by the African Reclaimers Organization below: 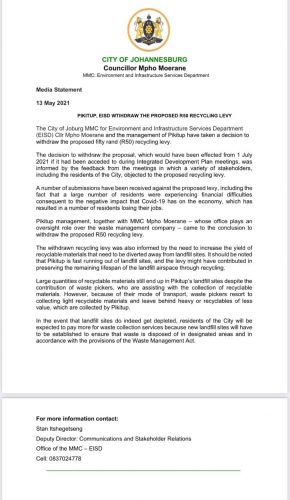 NO RECYCLING WITHOUT RECLAIMERS!