ARO claimed the accolade in the organisational category, while Professor Scholes, who passed on in April this year, won the award in the individual category.

The Living Planet Award honours exceptional South Africans who, through their catalytic contribution, inspire people to live in harmony with nature.

“Waste is everyone’s business, and collectively we can solve the problems that come with it.” — ARO 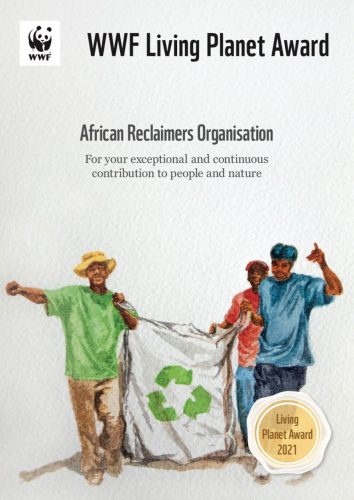 The ARO, a non-profit organisation representing informal waste pickers, was honoured for its work in support of a truly circular economy and for being the voice of a particularly vulnerable community in the waste and recycling sector.

It was formed in September 2018 in response to the City of Johannesburg’s decision to contract private companies to collect recyclables from high-income areas in the city, thereby displacing informal reclaimers and threatening their livelihoods.

The organisation works to foster a better relationship with key actors in the waste system, including residents, businesses and municipalities, and to remove the stigma and social taboos connected to the work of reclaimers.

Dr Morné du Plessis, CEO WWF South Africa commented: “We applaud the ARO’s efforts to advance their cause for recognition and dignity for those who are among the most vulnerable players in our waste sector.”

“This is a huge step towards the waste pickers recognition and dignity. We feel proud for all of the hard work and commitment from ARO and we’re glad WWF has realized that, too!” — Lucia Fernandez, Global Coordinator for the Global Alliance of Waste Pickers (GlobalRec).

Honouring a “giant in the field of climate science”

At the time of his passing, Professor Scholes was a distinguished professor of systems ecology and director of the Global Change and Sustainability Research Institute at the University of the Witwatersrand.

WWF said in its homage to professor Scholes that he was “a giant in the field of climate science, a true leader and dedicated conservation ecologist”. The award honoured his lifelong commitment to science and the inspiration he continues to give those who follow in his footsteps.

Recognised as an A-rated scientist in South Africa, professor Scholes was also ranked among the top 1% of environmental scientists worldwide based on citation frequency. He published widely in the fields of savannah ecology, global change, and earth observation.

On the international stage, he gained recognition as one of the lead authors in the third, fourth and fifth assessment reports of the Intergovernmental Panel on Climate Change on the present and future effects of climate change and how humanity can adapt to reduce climate threats.