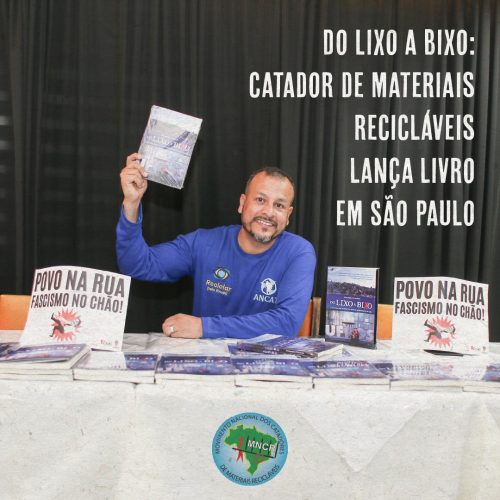 The waste picker Alex Cardoso promoted the launching of his book, together with other waste pickers connected to the National Movement of Waste Pickers (MNCR) in Brazil.

“Do lixo a Bixo” (From Trash to Freshman) tells a true story of a waste picker of recyclable materials semi-illiterate, black, living in a shack in the outskirts and risky areas, working since his childhood, who became a father at the age of 16, finding himself forced to abandon his studies to provide for his family, but that after 20 years, in a total shift in his life, returns to the school bench, completes his studies, and achieves a place at the Federal University of Rio Grande do Sul.

A story filled with precariousness, labor exploitation, social exclusion, but also a story of struggle, resistance, and achievements, where this waste picker becomes a reference in social organization, representing the category in agencies such as the UN and ILO, collectively organizing national and international meetings, proposing public policies, speaking at various universities in Brazil and around the world. Follow his journey, written in a critical way to the political and economic system in place, proposing emancipating education as a way to pursue and mainly share knowledge, paving and enlightening a path for students and the school community to walk, proposing a culture of studies and the tripod to sustain life as a concrete form of revolution in the world, based on solidarity, empathy, and love.

The waste picker and the book

The waste picker was born in a wagon pulled by his parents, his distraction was to separate the recyclable materials from the waste, to sweep the yard with his small broom and ask for coins from the good souls he met on the streets of Porto Alegre.

Hunger and poverty were two intruders in his life, so wicked, they often made him cry. When he would suffer from hunger, having nothing to eat, he would hear his mother say: “go play and the hunger will go away”.

At the age of six, he learned from his father to read his first words and to do some calculations. He loved it. He saw that the world was wonderful place and that things had a logic.

He loved going to school, sitting right in front of the teacher. He liked the meals because sometimes they were the only food he would have all day.

His childhood was made up of many shortages, but he never lacked one thing: the love of his parents and siblings, an older brother and two younger sisters. His sisters were always next to him, learning the lessons of life.

In his teens he had to leave school, he was going to be a father, and he had to work. It seemed the right thing to do, and he had no choice. Work a precarious job forever, his future was then sealed. The waste picker who loved to read but could no longer go to school.

He didn’t give up, every chance he had, he would read, his colleagues from the waste picker cooperative would tell him: “If you want to read, go home, here you have to work”.

In fact, that was true, if he didn’t work, he had no food. Working very hard, more than 10 hours a day, the money was really short, just imagine not working.

The waste picker always dreamed about studying, he would pass in front of the school and see those open gates, the children playing and studying happily, a world he wanted for himself, but that was not possible. Not yet.

At the age of 21 he was chosen to go to a waste pickers congress in Brasilia, that was when the National Movement of Waste Pickers of Recyclable Materials in Brazil was founded, he loved traveling, meeting new people and seeing that his life was similar to that of many people.

He became a representative for this movement, had a cell phone that was the contact for people to talk to the movement. He learned on his own to “work” on the computer and to type his first words.

The waste picker started traveling, he was invited to help organize others. He was always happy, smiling at everyone, but he was very tough, demanding public policies and advocating for the rights of the waste pickers.

Soon he began to travel the world, visited many universities, was invited to participate in lectures. He was considered as an intelligent person who didn’t need a diploma because he had the school of life.

The waste picker never liked this school, because he saw that the value is not in it, but in the real-life school. To get a degree from the school of life, you just have to be alive.

With all his strength, without abandoning his work at the cooperative or the support of other waste pickers in the world, he went back to school. He began by sitting with the teenagers and with great joy he graduated from elementary school.

No one could really feel what the waste picker felt about that piece of paper, the elementary school diploma. It was normal for 14/15-year-olds to have this diploma, but for him it was different, precisely because it was much harder, it was also much more celebrated.

He started going to high school, when he noticed that the governor wanted to privatize education, without hesitating, he got together with other classmates and teachers and occupied the school for 36 days. Some of his classmates were only 6 years old.

After they won this fight collectively, he graduated from high school. A great joy and honor made him class speaker, who asked in his speech that education be revolutionary.

He didn’t even take time off, as he soon entered a popular preparatory course and for 3 months he was learning about the entrance exams of the UFRGS university. Deep inside he believed that it was possible to get into the university.

Have you even imagined a waste picker at the University? It would be too much to ask. He took the university exam and kept on working. One day, late afternoon and early evening, he was meeting with other waste pickers on the other side of Brazil, in Palmas Tocantins, giving classes on organizing the movement, when he received the news that he had passed the university entrance exam.

A whirlwind of emotions shook him, he wanted to control himself but all he could do was scream. The others were as happy as he was. It wasn’t a waste picker joining the university, it was an entire movement.

The waste picker not only reads books, he also decided to write one, to tell his real-life story, which he tells important parts of in the book: Do Lixo ao Bixo (From Trash to Freshman). The culture of studying and the Tripod to sustain life.

This book serves as enlightenment on the path for other waste pickers and students who, like him, want to achieve their dreams by studying not just to acquire knowledge, but to build a better world.

Hello, I am Alex Cardoso, you can find me on Instagram as @alexcatador, I am a waste picker, social scientist and writer, I have told my story and would love to read yours.

Together we can revolutionize this world.

Characteristics of the book: