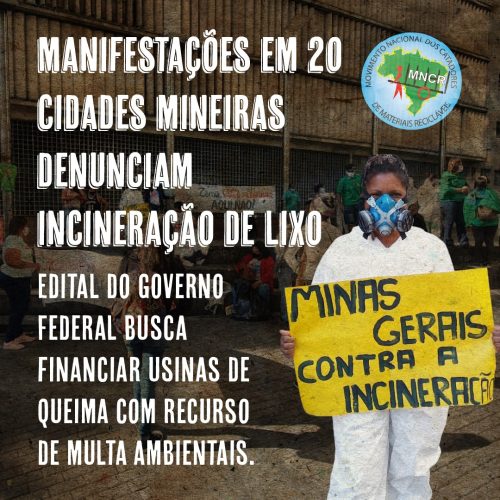 Protests brought together environmentalists and waste pickers on July 21st in a day of struggle against the Ministry of Environment’s edict.

Protests over 20 cities in Minas Gerais, Brazil, brought together environmentalists, waste pickers and collectors of recyclable materials on July 21 in a day of struggle against the notice of the Ministry of Environment that induces the route of incineration of garbage for consortia of municipalities of Minas Gerais. The program Lixão Zero, launched by former Minister Ricardo Salles, removed by corruption accusations, has a budget of R$ 100 million to finance mechanized selection plants, without segregation at the source, that is, without selective collection and environmental education. The money comes from environmental fines issued by Ibama against the mining company Vale for the environmental disaster in the municipality of Brumadinho.

For MNCR members, the production of CDR (Fuel Derived from Waste) is just a way to disguise the intention of burning the waste, a highly polluting practice, in addition to not implementing the National Policy for Solid Waste. The category also denounces that the public notice for the contracting of the plants does not mention at any moment the work done by the collectors.