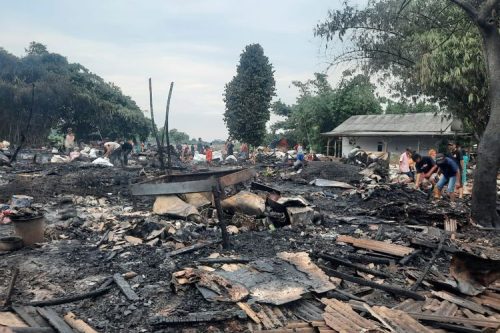 Firefighters received the call at 3:15pm western indonesia time and went to the local with 7 fire trucks. It took them 2 hours to put out the fires.
No casualties were reported, but losses are estimated at IDR 300 million (approx, €19,000) and a burned area of 1,000 square meters.

The cause of the fire is suspected to be an electrical short circuit. The owner was away, and so the fire quickly spread to surrounding homes due to the large amount of flammable materials/rubbish in the area.

The case is now being investigated by the sub district police and Bekasi metro city police. According to a media interview with Bantar Gebang Subdistrict Police, authorities are collecting data on the waste pickers and are going to find shelter for those who do not have relatives to turn to.

What IPI has done so far:

IPI hopes to be able to build more adequate homes for the waste pickers in the near future.

This is the bank account of IPI, they are accepting donations:

Distributing staple food packages for waste pickers who were victims of the fire.