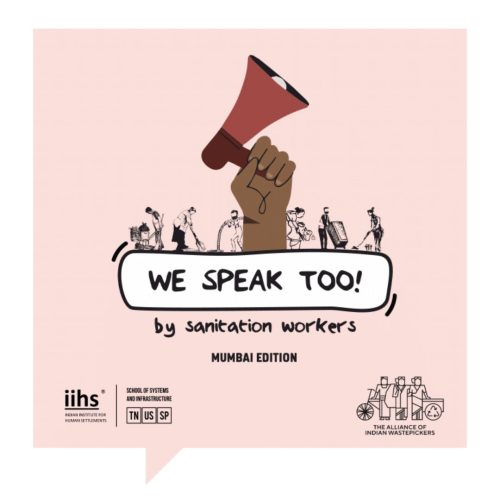 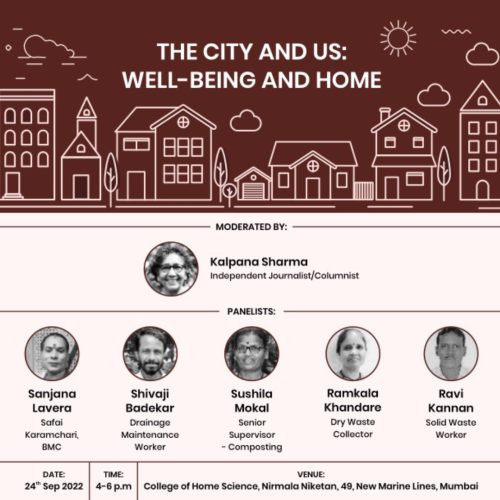 A multi-city series of curated seminars — ‘We speak too, by Sanitation Workers’, co-organised by Indian Institute for Human Settlements (IIHS) and the Alliance of Indian Waste Pickers, provides a platform for sanitation workers playing various roles in various urban contexts to come together to narrate their stories, challenges, and experiences for diverse audiences.

The first part of the seminar series was held in Bangalore, and it was a learning experience for all participants. We had the opportunity to hear about the workers’ unique experiences, their troubles, and their demands.

This seminar series now travels to Mumbai to bring forth the voices of the city’s sanitation workers and understand aspects of their lives from their own perspectives. 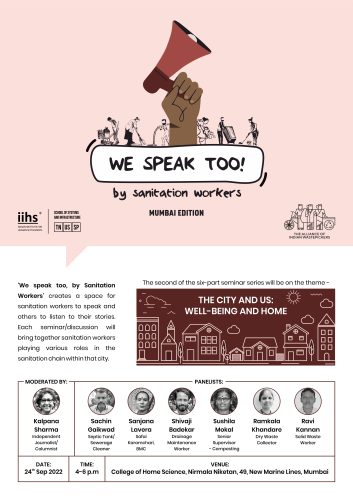 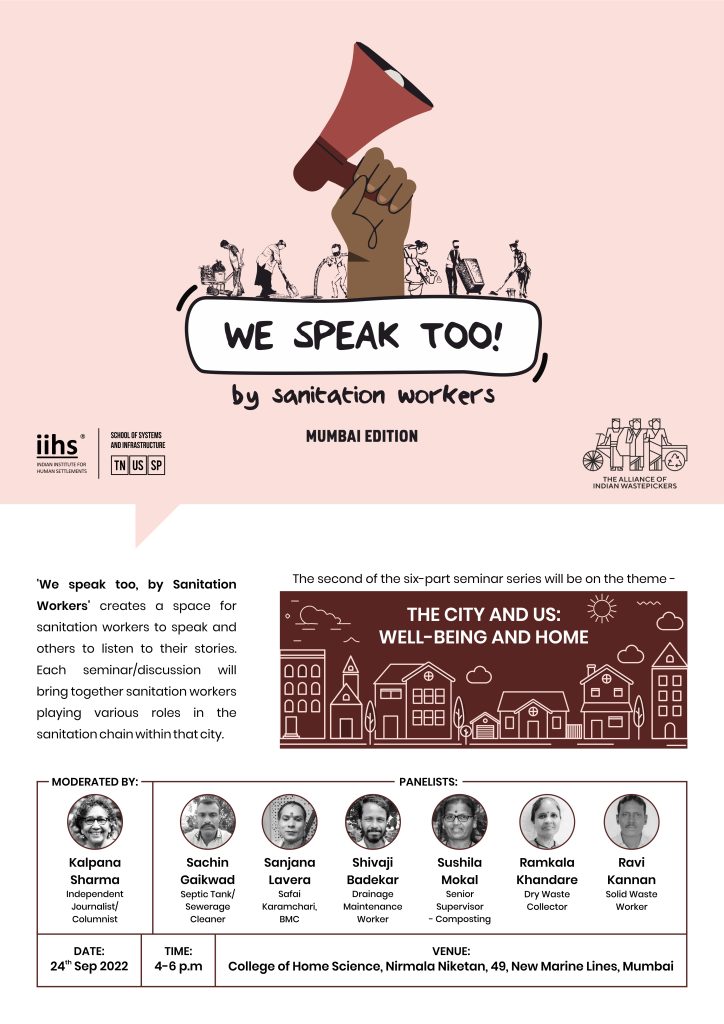 Kalpana Sharma is an independent journalist, columnist and author based in Mumbai, India. In almost five decades as a journalist specializing in developmental, environmental and gender issues, she has worked with Himmat Weekly, Indian Express, Times of India and The Hindu. She was Consulting Editor with Economic & Political Weekly and Readers’ Editor with Scroll.in. Her column on gender, “The Other Half” ran for 30 years first in Indian Express and then The Hindu. Currently, she writes a media column in Newslaundry.com. She has written two books and is the editor of four titles. Her latest book is “The Silence and the Storm: Narratives of violence against women in India” (2019).

Sushila started waste picking when she was at the age of 10 along with her mother. Her father died when she was seven years old. Hence the responsibility of the family fell on her mother due to which she adopted waste picking as an occupation. Sushila got married at the age of 12. Her mother in law was also a waste picker. Sushila started waste picking by roaming on the streets. In 1998, Stree Mukti Sanghatana came into her life. She started participating in various trainings of Stree Mukti Sanghatana and she learned skills like gardening & composting. After learning the work of composting, she started working on a composting project in Tata Colony. For the last 15 years, she has been working as a supervisor in the composting project. Under her supervision, fifteen societies are doing composting in society premises. She also plays a crucial role in communication and outreach with the society members by taking awareness sessions to convince them to install composting pits. She is a secretary of Vasundhara Cooperative. Vasundhara Cooperative is a waste pickers cooperative formed by Stree Mukti Sanghatana. Vasundhara Cooperative takes the contracts of housekeeping work, composting work and waste management at various events.

Due to drought in 1972, Ramkala’s family migrated to Mumbai in search of work. Her mother and father adopted waste picking as an occupation. She studied up to 7th standard. She got married at the age of 17. Due to the abusive nature of her husband, she decided to live alone with her two daughters. When her child was 3 months old, she started picking waste at the Deonar dumping ground. For the last 25 years, she has been picking waste at Deonar and Diva Dumping. She taught her daughters well and now her elder daughter is a nurse and another daughter is a beautician. In 1999, she became a member of Stree Mukti Sanghatana. She attended various leadership training sessions of Stree Mukti Sanghatana which led to increased confidence and leadership qualities among her.
Currently she is a committee member of Parisar Bhagini Vikas Sangha. Parisar Bhagini Vikas Sangha is a federation of self-help groups of waste pickers. PBVS has a membership of around 2000 waste-pickers and runs 7 Dry Waste Collection Centres in Mumbai.

Sanjana is working as a toilet cleaner in Bhandup region of Mumbai. When she was 10 years old, her father died and hence the responsibility of family fell on her. From the age of 10, she started the work of toilet cleaning. She has been cleaning the toilet which was built by the Municipality. She doesn’t have her own house. There is some space on the first floor of the toilets and she lives there. Municipality doesn’t give her payment, she gets payment from the Corporator. Monthly she earns Rs 6000 , But she told me that from the last six months she hasn’t received any payment. She also said that she does the work of toilet cleaning because she wants to live with self respect and earns money from her own efforts. As a trans person, she frequently faces abuse by men.

Ravi Kannan belongs to Tamilnadu state and he came to Mumbai in 1989 in search of work. In the beginning, he was working on a debris vehicle on a contractual basis. From morning 6 o’clock to evening 9 o’clock, he was getting hardly Rs. 100. In 1996, ‘Kachra Vahtuk Shramik Sangh’ requested him to become a member of the union. ‘Kachra Vahtuk Shramik Sangh’ is a union of sanitation workers in Mumbai. In 1996, he became a member of the union. With the help of a union, sanitation workers filed a petition in the court demanding a permanent basis of employment. With lots of struggle and agitation, he became the permanent in Brihanmumbai Municipal Corporation in 2006. Along with him, a total of 1200 dumping workers became permanent in BMC. Now he is working on corporation vehicles and collecting waste from societies and open dumps. Before 2006 he was working as a dumping worker. When he became permanent in BMC then he received an identity card and now he is a ‘Motor Loader’ on BMC waste collection vehicle. He is also a joint secretary of Kachra Vahtuk Shramik Sangh-Maharashtra Municipal Kamgar Union.

For the last 13 years, Shivaji has been working as a drainage maintenance worker in the Storm Water Drain Department in Dadar. He studied up to 12th standard but due to extreme poverty, he left education and chose drainage maintenance work as an occupation. He is working on a contractual basis with Brihanmumbai Municipal Corporation. In the beginning, he was getting Rs. 70 for the whole day. In 2014, drainage workers formed the union named Maharashtra Municipal Kamgar Union. Due to the formation of a Union and workers ongoing struggles, drainage workers started receiving payment according to minimum wages. With the support of the union, drainage workers filed a case in a court for permanent basis of employment. This struggle is still ongoing. He also said that he is not getting the proper money for his overtime work. In the pandemic, he demanded for sanitizer but BMC hesitated in providing sanitizer and his work was stopped for 15 days. He also told , there is no social security in this work. Due to the support of the union, drainage workers got the strength to fight for their rights.

Sachin Gaikawad joined BMC as a sanitation worker back in 2007 and was immediately tasked with cleaning the open dumps in the city. Educated till 5th standard, there were very few employment opportunities with Sachin and this prompted him to adopt and continue working as a sanitation worker. However, with time, as his family grew, Sachin was left with no option to look for supplementary income. This brought him to work as a part time septic tank/ sewage blockage cleaner in the city. Sachin feels his job is challenging and his employers are non cooperative. With BMC, after repeated pleas of permanent employment were rejected, Sachin and his colleagues moved to court seeking for job security. Sachin feels his work could have been made easier if he could access PPE, which is denied by his employers and often too costly for him to purchase out of pocket. With 2 sons growing up, Sachin hopes they will study and be employed in professions less challenging from that of his own.