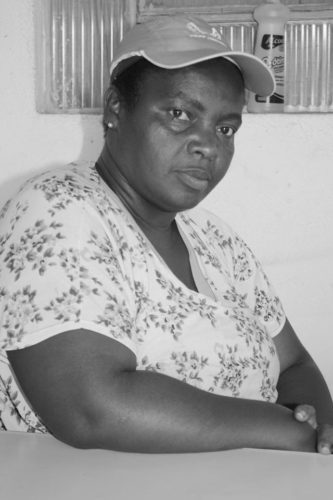 Lucilene Lorentino Santos Nogueira was born in 1969 in Belo Horizonte, Brazil. Her parents work in the old dumpsite of Nova Granada in the outskirts of the city. They would take her and her five siblings to the dump, but the kids would be resting under a tree whilst their parents toiled rummaging through waste to find recyclables. Her parents had four child more in the years following.

Three of her brothers died a couple of years ago and so did her parents. She says things used to be tougher and more precarious in the past.

As she grew older, Lucilene started working at Ibirité’s old dumpsite along with her husband and one of her kids. She got married at the age of 16 and had three kids that currently are not working as waste pickers. She started picking waste because she was jobless. She left the dumpsite a couple of years later and started working as a maid cleaning other people’s homes.

Three years ago she had a stroke during a meeting where she and members of her community were discussing the creation of a waste pickers association. After having recovered, she joined her comrades at ACAMARES – the Waste Pickers Association of Sarzedo, where she lives. Ever since she works there classifying recyclables. At first, she faced some difficulties due to the sequeale of the stroke, but her friends helped her overcome her struggles. She was not able to retire because the government officials said she did not contribute to social security for a while – odd things that happen in Brazil.

When asked about a dream she has not fulfilled so far, Lucilene said she would like to study. She would also like to be able to buy some land in the neighbourhood where she currently lives in order to build two small houses to rent and complement her income. She already owns a property, but she would like to renovate it and build some furniture. Simple dreams of a brave woman that symbolises the courage of waste pickers. This is our comrade Lucilene from ACAMARES SARZEDO