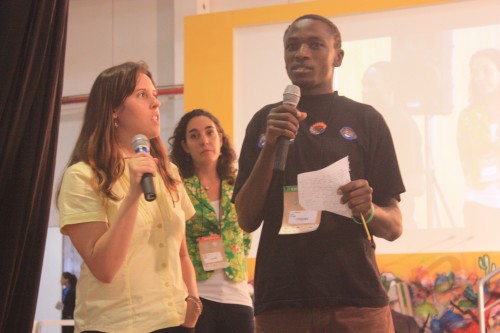 Peter Abolem Wilson, 29, is a street waste picker from Nakuru, Kenya. He started working as a waste picker when he was 15 years old. He is a member of NAWAPA – the Nakuru Waste Pickers Association, which has 180 members and continues to grow. The association is now a member of the national umbrella association called WAPAK – the Waste Pickers’ Association of Kenya. Peter has been making exchange visits to waste pickers’ groups in other towns and cities in Kenya. He has also been mobilizing for new members to join his association. Right now, WAPAK is working on its national constitution.

The Kenyan waste pickers are facing many challenges, a major one being the lack of support from municipal governments. “They don’t recognize waste pickers,” he said. “We have no voice.” If waste pickers protest, police send them to jail or beat them, he added.

Peter and the waste pickers of Nakuru, Kenya, have also been fighting the privatization of waste collection and recycling. A private company took over solid waste management in Nakuru about ten years ago and has since displaced many waste pickers, he said. Street waste pickers caught collecting recyclables are fined or jailed for a month, and even beaten. Even the 300 or so dump-site workers are struggling because when the material arrives, it’s been picked through by the private company’s collectors.

“One day the whole world will recognize us and will know what part we play,” Peter said. “We play a big role in everything – in the government, development, climate change. If it weren’t for waste pickers, where would big recycling companies be?”

“We must let the government know we are here so it will give us support — maybe with machines or a workspace,” he said. “When we have someone there at the national level to represent waste pickers, the government will hear our voice.”