What kind of relationship exists with the municipality?
Providers of infrastructure
How is the relationship with the municipality?
Excellent and/or friendly
Types of materials
Biodegradable, Biodegradable waste
Are they selling to middlemen?
No
Activities
Composting, Training and capacity building, Waste management
Sorting Spaces
Sorting center / sorting workshops
Treatmet of organic materials
Composting
Challenges to access waste
Price fluctuations of waste

Information source
Georgina, the community project coordinator, provided this information to the Alliance of Indian Waste-pickers.

Under the North Eastern Region Capital Cities Development Investment Programme (NERCCDIP), State Investment Project Management and Implementation Unit (SIPMIU), Urban Affairs Department and Shillong Municipal Board (SMB) have developed a plan to rehabilitate the women and facilitated the formation of the Iainehskhem Self-Help Group (SHG), in November 2014 with the objective to enhance the livelihood of women waste pickers. The group has become a replicable model for villages and town colonies where decentralized waste management can be implemented. 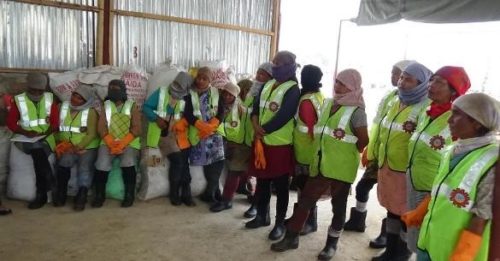 After being trained the women group has shown that they can make full use of their learnt skills. The members of the SHG became cohesive after much hand-holding and training organised by the Community Team of the NERCCDIP. The group has framed their own rules and regulations and it has become cohesive with a strong Team Spirit. The women have a very organised system of working. Members’ attendance is taken everyday and the women work for three hours a day. During Winter Season, the members work from 2:00pm to 5:00pm and during the summers from 3:00pm to 5:00pm depending on the supply order. Monthly meetings are held to discuss ideas, issues and problems and way forward. They truly uphold dignity of labour and happily go about their work of composting, so much so they have come to be known as “Merry Maidens of Marten” for their sense of happiness, unity, and cooperation.

Slowly their interest in making use of the waste item emerged through a few trainings that were organised for the members. They have started monthly saving from the meager income they get from rag picking. They have launched a project to compost the biodegradable waste with simple indigenous techniques of composting. Through the constant encouragement these women have become champions of green economy and green-jobs. The SHG has already produced about 15379 kgs of compost manure, tested by the Department of Agriculture Laboratory and certified that the manure is good for plants. Another test from the ICAR laboratory has re-confirmed that the organic manure is suitable for plants. The compost products are produced from Trench Composting, Bokashi and Sasac or Vertical Composting technology, perfected by the SHG, which is a FIRST in the North Eastern Region. The different processes of composting technologies are Trench Composting, Bokashi Composting and Vertical/SASAC composting technologies.